I am pleased to have Sonia Marsh with us this week. 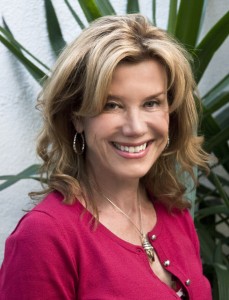 Sonia is the award-winning author of the travel memoir Freeways to Flip-Flops: A Family’s Year of Gutsy Living on a Tropical Island and founder of the “My Gutsy Story®” series. The first anthology in that series, My Gutsy Story® Anthology: True Stories of Love, Courage and Adventure From Around the World, was a silver honoree in the 2013 Benjamin Franklin Digital Awards.
She offers “gutsy” book coaching to authors, as well as Webinars and Workshops. Contact her at: sonia@soniamarsh.com or visit her website: http://soniamarsh.com.

And, if you subscribe to her free “Gutsy” newsletter, you’ll receive two bonus prizes.

I’ll list her social media links at the end

Where Do I Belong in this World? I have no roots

My adventure started at the age of three months, when my Danish mom and English dad decided to raise me in Nigeria, a country in West Africa. There I grew up with a Great Dane to protect me from the occasional thief who broke into our family’s colonial house outside Lagos.

When I was six, we moved to Paris, and three years later, my parents sent me alone on a plane from Paris to Los Angeles to visit my cousins. I guess you could say I started my “gutsy” adventures at a young age. In 1983, I moved from Paris to California to start a new life. I was twenty-five and met my husband, Duke through an ad in a magazine.

I have lived in eight countries: Denmark, Nigeria, France, England, Scotland, Belgium, Belize and the U.S. I’m an adult TCK (Third Culture Kid) and like other TCKs, have developed a sense of urgency that life is to be lived now.

At another site, you’ll find a fairly extensive and sometimes entertaining list of typical TCK qualities.  E.g., You consider a city 500 miles away “very close.” - You get homesick reading National Geographic.

For a serious book on the topic, see Third Culture Kids at Amazon.com]

TCKs have no roots, and we ask ourselves questions like, why am I searching for my paradise?

I’ve spent my entire life searching for paradise and finally realize that paradise has to be found within myself. This was the conclusion I reached after writing my memoir: Freeways to Flip-Flops: A Family’s Year of gutsy Living on a Tropical Island. 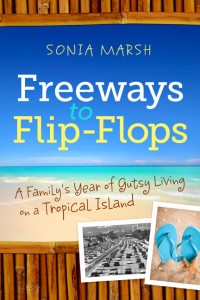 Comparing cultures is one of my favorite pastimes, and the following are my observations as an adult TCK, with the first 25 years of my life living in the UK, Europe, and Africa, and the last 30 in the U.S.

Competitiveness and Self-promotion: Since living in the U.S., I’ve noticed how much we talk about ourselves (me included) and our work, as though we’re being interviewed and have to prove our worth. Not taking vacations and working 70-80 hour weeks is something we seem to admire. From conversations with people I meet, the American work ethic is so ingrained that taking several vacations a year is viewed as being “unproductive” or “lazy,” which is not the case in Europe. People in Europe seem to have a more balanced life.

I prefer the work/life balance in Europe where studies have shown that after a 3-week vacation, Europeans are more productive at work than Americans who don’t take time off.

Bragging about ourselves and our kids: It’s more common to hear people talk about their successes and accomplishments in the U.S. I know I’ve started to do this more and more, and sense that it makes my dad and European friends slightly uncomfortable. They don’t brag, even if they’re successful.

Often with sports, parents brag about how their kids came in first place, or how they’re on the varsity water polo team. Even in elementary school, several parents bragged about how their kids could read at 6th grade level when they were in 2nd grade. I’ve often thought that if all this is true, the U.S. must have the smartest kids in the entire world, which if you look at education statistics, is not the case.

Professionalism: In the U.S., we expect professionalism. Americans, used to watching professional singers and actors, are far more discerning. When an ordinary person, like me, makes a speech, we expect a good “performance.” I believe this is due to our media, Hollywood, and the entertainment business in general. This industry is world renowned and Americans, from childhood are used to seeing a higher quality of showmanship.

I think Europeans put up with “lower” standards than we do. If you watch the “European Song Contest,” a big deal on European TV, many of the singers wouldn’t even make it through the first round of “American Idol.”

Praise/Compliments: Americans give and accept compliments easily. Europeans see this as superficial and phony. I’ve told my friends things like, “I love your hair,” and they give me a funny look.

I think we’re used to praising our kids more here than in Europe. We think it builds self-esteem.

Money: Many talk about money and, as a society, we admire people who are rich and famous. Europeans don’t talk about how much they or anyone else makes. I’ve noticed that money comes up frequently in the U.S., especially in the media.

Lawsuits:  People are so used to hearing about lawsuits, and when I hear teens talk about suing, I realize how ingrained this has become in our way of thinking.

Politics: I’ve heard several people say that you’re not supposed to discuss politics and religion, as these are personal topics. I think it’s interesting to learn from others, even if you don’t agree with them.

People here become very defensive if you express your views. They take it so personally if you don’t agree with them. I love the way the French can discuss abortion, homosexuality, racism and other topics as a debate, rather than as a personal issue. In a way, I find people more tolerant of others’ views and willing to see many sides and discuss them, rather than it’s my way and that’s it.

Eating Habits: Americans have become accustomed to large portions . I didn’t realize this until we travel abroad, and I saw that even a yoghurt container is half the size in England, compared to one in the U.S.

I saw a sign at the doctor’s office that said, “You think a safe place for your baby is in your arms. It can also be one of the most dangerous.”

Why does the U.S. media bombard us with messages to make us scared and fearful?

Please note these are my personal observations, and I realize they are based on where I live now, in Orange County, California. People are different all over the U.S., however the media does affect all of us, and one thing I truly miss from Europe, is how they take an interest in the global outlook. Unfortunately, “news” in the U.S., seems to be more about entertainment than about people in other parts of the world.

Sonia, thanks so much for sharing your observations here with us.  I’m reminded of that famous line from Robert Burns’ To A Louse,

O wad some Power the giftie gie us

Your observations are consistent with many I’ve heard, and some I noticed myself when I first returned from the Peace Corps: how large our food portions are, how prevalent is that urge for “immediate gratification,” among others.

I’m so glad to be reminded about Third Culture Kids, too. It points up for me how much I take my own sense of rootedness for granted. Taking something for granted is a bit like sleeping, I suppose. We don’t generally know we are doing it until we stop.

Surely, this is one of the many gifts of culture clash — we get to think about, understand, parts of our own culture anew.  And you know, some of us transplants put down new roots more easily than others.

How about you? Are there behaviors or values of your own culture that you once thought of as universal?

AND, please note that Sonia has offered to give away a copy of one of her books: 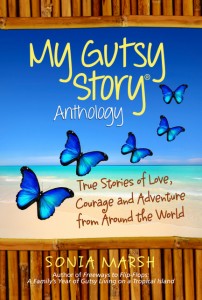 to one of our commenters.  I’ll announce the lucky winner on my Facebook Timeline on Sunday.