At Home on the Kazakh Steppe

Home > Books > At Home on the Kazakh Steppe 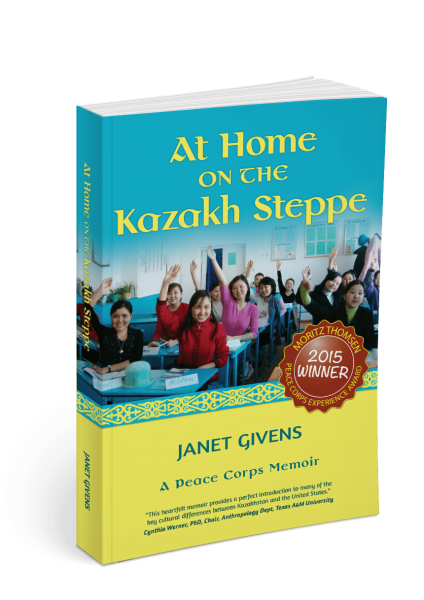 Just when her life felt right: new home, new career, new grandchildren, Janet Givens leaves it all behind and, with her new husband, joins the Peace Corps. Assigned to Kazakhstan, a Central Asian country finding its own way after generations under Soviet rule, she too must find a way to be in a world different from what she knew and expected.

Will it be worth it?

At Home on the Kazakh Steppe is the story of an average American and her new husband who reevaluate their lives as many Americans did in the fall of 2001 and determine they want to present a different face of America to the world.

It the story of a middle-aged grandmother who left behind a life she loved and forged a new identity as an English teacher, mentor, and friend in Kazakhstan, a newly independent country determined to find its own identity after generations under Soviet rule.

And it is the story of bridging cultural barriers to friendship through the universal values of laughter, acceptance, and curiosity.

I am enrolled in Amazon’s Affiliate program. If you purchase my book through this link, they’ll pay me a (very) small amount.  Thanks. Just cross your fingers and click.

For the print version, now in its fifth edition:

For the digital version, which follows the audiobook through WhisperSync:

For the audio version from Audible:

I’m pleased to announce that At Home on the Kazakh Steppe has been awarded
The Moritz Thomsen Peace Corps Experience Award
for 2015.

The Peace Corps Experience Award was initiated in 1992, and is presented annually to a Peace Corps Volunteer or staff member, past or present for the best depiction of life in the Peace Corps.

You can read more about the award here.

“Janet Givens’ pen perfectly captures the mood and colour of Kazakhstan, and her characters leap off the pages and into the arms of the reader. She set out to make a difference, and with this book, Janet Givens has done exactly that.” —Victoria Twead, New York Times bestselling author of Chickens, Mules, and Two Old Fools

“Revealing, frustrating, and at times daunting, this is a fascinating book worth reading more than once, for each reading uncovers new interest. It has the benefit of being written by an author with extensive life experience, and the ability to distill complex ideas and feelings onto very readable prose. It deserves to be widely read.” —Ian Mathie, author of Man In A Mud Hut, Bride Price, and other memoirs of life in Africa

“I love stories about cross-cultural learning, especially honest ones that don’t demean but also don’t romanticize the people and the experience. … I will always think of this book whenever I encounter references to Kazakhstan. It was a riveting read.” —Shirley Showalter, former president of Goshen College, blogger at shirleyshowalter.com, and author of Blush: A Mennonite Girl Meets a Glittering World

“This heartfelt memoir provides a perfect introduction to many of the key cultural differences between Kazakhstan and the United States that American Expats are likely to encounter, while reminding all readers that it’s never too late to follow your dreams and have a life-transforming adventure abroad.” —Cynthia Werner, Ph.D., Associate Professor and Head, Department of Anthropology, Texas A&M University

“If social anthropology classes used text books like this, students would flock to register!” —Sharon M. Lippincott, author of Adventures of a Chilihead: A Mini-Memoir With Recipes

Praise for At Home on the Kazakh Steppe

“Moving, insightful and informative travel memoir—At Home on the Kazakh Steppe is memoir writing at its best—moving, informative and deeply insightful. The book paints a wonderful picture of life in Kazakhstan. Indeed, I was so charmed by Janet’s portrayal of her colleagues and students that I’m now longing to visit this lesser-known country and experience its delightful people for myself.

More important, however, is the book’s gentle but insistent message that the differences between cultures are so much less important than the similarities among people everywhere. Janet is particularly deft at creating a narrative arc across the two years’ of her stay in Kazakhstan in which customs and mannerisms that seemed jarring or simply “foreign” in the beginning came to seem charming and wonderfully universal at the end. Very skillful indeed.I recommend this book not only to people interested in Kazakhstan and former-Soviet countries, but to everyone interested in the transformative effects of travel and immersion in foreign cultures. Buy this book—you won’t regret it!”—Bookedup (aka Patrick Youngblood), 5 Star “verified purchase” review, Amazon.com

“Thank goodness she decided to write At Home on the Kazakh Steppe, a delight for any reader.” —Leita Kaldi Davis, for Peace Corps Worldwide

Endorsements
“... a lively, poignant, and delightful story about the adventures of a very energetic grandmother ... It is a pleasure to travel with her in this entertaining book.”
– Reeve Lindbergh
“...she writes engagingly ... a sharp-eyed journalist. A worthwhile read for anyone with an interest in humanitarian work.”
– Kirkus Review
“We learn about the world and our place in it through stories. And I really enjoyed reading Janet Givens' story of her two years in Kazakhstan for it reminded me that while we travel to learn about the world and others, in the process we learn more about ourselves.”
– Dr. Carlyn Syvanen, English Language Specialist, U.S. State Department
"This book is pretty much the perfect memoir and would serve well as the standard to achieve for anyone who wants to write one. It has the perfect balance of education, humour, understanding, observation, emotion and interest and is truly hard to put down."
– Lindsay de Feliz
Look Inside
Disclosure of Material Connection: Some of the links in the page above are "affiliate links." This means if you click on the link and purchase the item, I will receive an affiliate commission. I am disclosing this in accordance with the Federal Trade Commission's 16 CFR, Part 255: "Guides Concerning the Use of Endorsements and Testimonials in Advertising."