Home > Books > LEAPFROG: How to hold a civil conversation in an uncivil era 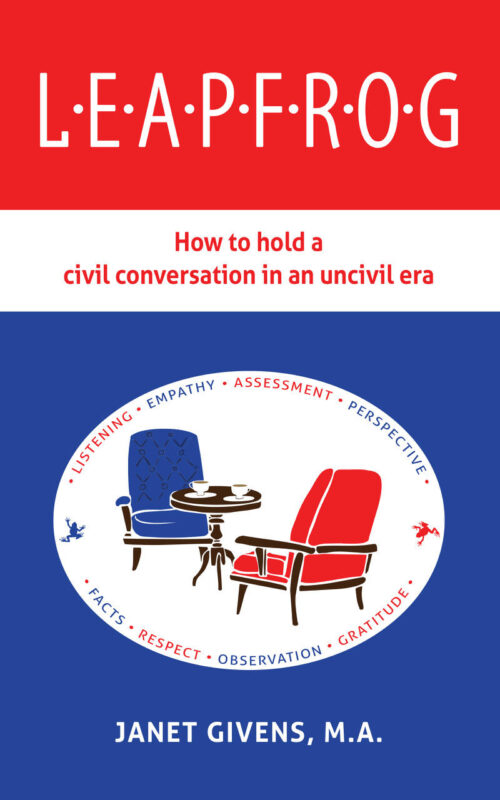 Conflict, difference, disagreement, even misunderstanding can arise unexpectedly during the course of anyone’s day.

While remaining civil is not always easy, hate and fear are neither the natural nor necessary responses to difference. Nevertheless, we get triggered, sucked into an argument we didn’t see coming, propping one set of facts up against another with neither side listening, and eventually wondering what the hell just happened.  We can come together again, though. Participating in a non-judgmental conversation on matters of importance gets us started. LEAPFROG presents the combined wisdom of many on how to be heard -- and how to hear -- without judgment. That's when the magic happens.

Order Now!
About the Book

The eight concepts forming the acronym LEAPFROG are designed to

Are you part of a group that might adopt LEAPFROG for a few months? This book is designed to be used in a small group, with support as the reader practices the ideas presented.  Taking a chapter at a time, whether weekly or monthly, has proven to be a  useful model in better absorbing the principles presented.

As important as politics are these days, this book is not limited to political conversations. The ideas given here can be applied to any conversation you deem “difficult,” from marital disagreements and parent-teen clashes to neighborhood standoffs and workplace disputes. And so, perhaps a more inclusive subtitle would be, How to Hold a Difficult Conversation at a Difficult Time.

Here’s a brief taste of the new Introduction:

The aim of this little book is simple: to get us all talking again, civilly, with those with whom we disagree. Civil discourse, it’s been called, and it was once taken for granted.

Evolutionary biology is quite clear that we are hard-wired to treat differences with suspicion; our caveman ancestors weren’t singing Kumbaya around that campfire, to be sure. So, it is understandable that the idea of talking through conflict can feel so uncomfortable as to be off-putting. Engaging in civil discourse about topics on which we disagree may not come as easily as we’d like, but, after spending the last five years reading what so many others have to say on this topic, I’m convinced that we must bring it back, and that we can.

My premise is that learning to manage conflict is possible if we are willing. Think about that. While it may never be actually comfortable, we can learn to disagree without being disagreeable, and we can do it without abandoning our political and philosophical beliefs. This book explains how.

My memoir, At Home on the Kazakh Steppe, emphasized how exciting, enlivening, and enriching cultural differences could be. In that memoir and in the blog posts that followed, I wrote about how cultural differences (though also often exhausting) add spice to our lives as they help us learn about ourselves. I was particularly interested in those cultural differences, both at home and abroad, that “made me gasp” because they often taught me what I’d not noticed of my own culture. Eventually, I’d wind up smiling in understanding.

Following the US Presidential election in 2016, I found myself confronted with cultural differences I could not imagine ever smiling about. I gasped, metaphorically, for I’d grown up with ever present news stories of the corruption, deceit, and playboy antics of the man soon to be occupying the people’s White House. Juxtaposed against the elegance of the early ‘60s Camelot era that had helped form my political identity, I was afraid for my country and its future, angry over the absurdity of it all, and sad that I felt so impotent to do anything about it.

As incivility rose that year and into the next, my Facebook Friends list thinned a bit and I found myself wondering why we were all having such trouble being civil. More importantly, why did I not want to engage with any of “them?”

When I was growing up in the 1950s and ‘60s, the Emily Post books on etiquette taught that, in polite conversation, we must stay away from politics and religion, two topics that are central to how we see ourselves. In those days, we’d have guests with divergent belief systems and opt for dinner party civility over possible discomfort among our guests.

These days, politics and religion are no longer taboo, for we tend to surround ourselves with those who think and vote and worship (or not) as we do. Ideological bubbles, some call them, and we live comfortably within their fixed confines. And I’m thinking these bubbles are sadly getting smaller as we become more and more disconnected from anyone who disagrees with us.

Endorsements
LEAPFROG: How to hold a civil conversation in an uncivil era … is a gift to a world that needs it more than ever. With increasing divides between us, the possibility of connecting with someone who disagrees with us seems remote. But this step-by-step guide is packed with researched-based tips for civil conversation…. She describes the root of her process as, “It’s all about listening and being heard.” Don’t we all want that?
– Terri Lyon, Ph.D., author, What's on Your Sign? and Mental Health Activism
This little book could well prove its value the next time you talk with someone outside your bubble of like-minded friends. . . The acronym LEAPFROG is both memorable and remarkable. A synthesis of some of the best and well-known literature in the fields of conflict resolution and civic engagement.
– Shirley Showalter, former president, Goshen College; former executive, the Fetzer Institute; and author, The Mindful Grandparent (2022) and Blush (2013)
Janet Givens has captured the essence of civil conversation in the clever acronym LEAPFROG. In restorative justice work, we begin with establishing that there is something in this universe which connects us. It might be where we live, it might be our ancestry; often it is our shared values that help us move a conversation from trying to convince to being curious. Thank you, Janet, for paving the way. May we all be courageous enough to initiate a civil conversation.
– Susan Cherry, Executive Director, The Community Restorative Justice Center, Inc., St. Johnsbury, Vermont
Book Club Resources
Disclosure of Material Connection: Some of the links in the page above are "affiliate links." This means if you click on the link and purchase the item, I will receive an affiliate commission. I am disclosing this in accordance with the Federal Trade Commission's 16 CFR, Part 255: "Guides Concerning the Use of Endorsements and Testimonials in Advertising."