And So It Goes

I’m particularly interested in those cultural differences that make me shudder, make me yell out , “Oh, no.”  The multi-colored costumes and exotic dances, music, and food of foreign lands is entertaining, of course. But I want to know what’s underneath: their history, their usage in past generations, like the underwater part of an iceberg.

“Why not?” I asked myself when offered a sausage made with the skin of a horse’s penis. (Though some books state the sausage is made with the horse’s intestine, I was informed rather proudly that it was the penis. Whatever, it was delicious.) And so, rather than shuddering and turning away, I learned about a people, the Kazakh nomads, who — once upon a time — did not let anything go to waste. And are still rather good at that. I found that fascinating.

I wrote once about baggage: how Americans carry excess baggage of one sort or another with them, while the Kazakhs — of nomad stock — travel light. Their excess baggage, I pompously stated at the time, came in the form of superstition, while ours was of a more materialistic bent. That was a lifetime ago. I hope I know better now.

I’ve come to see that we all live with baggage, with superstition of one sort or another: belief systems that others find strange, values that just aren’t shared.  The opportunity to embrace those differences — for their inherent difference, not to try to convert or to be converted — shouts out to me regularly. And to the extent that I can embrace them, I live a richer, fuller life. I just believe that. Maybe it’s a superstition.

In any case, here’s a story from an earlier draft of my book. It speaks both to the different beliefs of two very different cultures, and to the baggage with which I as an American seemed to surround myself: the  accumulation of things. In my case, a set of cross-country skis that I never used.

From my Deleted Scenes collection:  Regina

One of our early social invitations was from the Peace Corps volunteers in the nearby village of Satpaev. Toni was finishing her two-year stint and would leave within the month and Annelies had stayed an extra year and was half-way through that. This night, the party was for Toni’s birthday and it was in full swing when Woody and I arrived.

Her apartment was packed, brightly lit with American music blaring from a tape deck. There was homemade pizza and familiar American party snacks. Beer flowed freely, the Coca Cola was somewhat cold, and they had extra batches of distilled water. Best of all, in those very early months, everyone spoke English, at least to some extent.

I was drawn to a conversation on the floor where I heard something about feet. I pulled in closer, curious.

“Well, why is that?” Toni was asking the young Kazakh man who sat on the floor, up against a wall with legs outstretched.

He chuckled as he answered, “It’s the way it is.”

“I mean,” Toni pursued, “is he thinking of himself — the stepper — or the steppee?”

Blonde-haired Regina filled me in. “They’re talking about why they sit cross-legged,” she explained. “So their feet don’t stick out.”

Regina would weave in and out of my life throughout our two-year stay. She worked as a receptionist at the Baikonur Hotel, the hotel with a four star restaurant to which all cosmonauts and a few American astronauts went following their landing on the Kazakh steppe. Her English was excellent.

The story had begun with a group of American Peace Corps volunteers, sitting in the aisle of a train with their legs stretched out before them. I could picture them easily, backpacks strewn here and there, laughing; probably one of them had a guitar. Then, a man walking down the aisle stopped and would not step over their legs. He had just stood there. The Americans  did not know why.

The young man continued to explain. “He will go around if possible, and if that’s not possible, he will simply wait until you pull in your legs.”

“Yes, that’s what I mean,” said Toni. “Is he doing that for himself or for the person with the legs out? Who is insulted? ”

“He does it for the person on the floor,” he responded with a grin. “A Muslim will not step over your legs because it is disrespectful to you.”

Regina’s father was Latvian, her mother Russian, so she used the third person as she explained this Kazakh custom to me. “Muslims do not show the bottoms of their feet or shoes.” 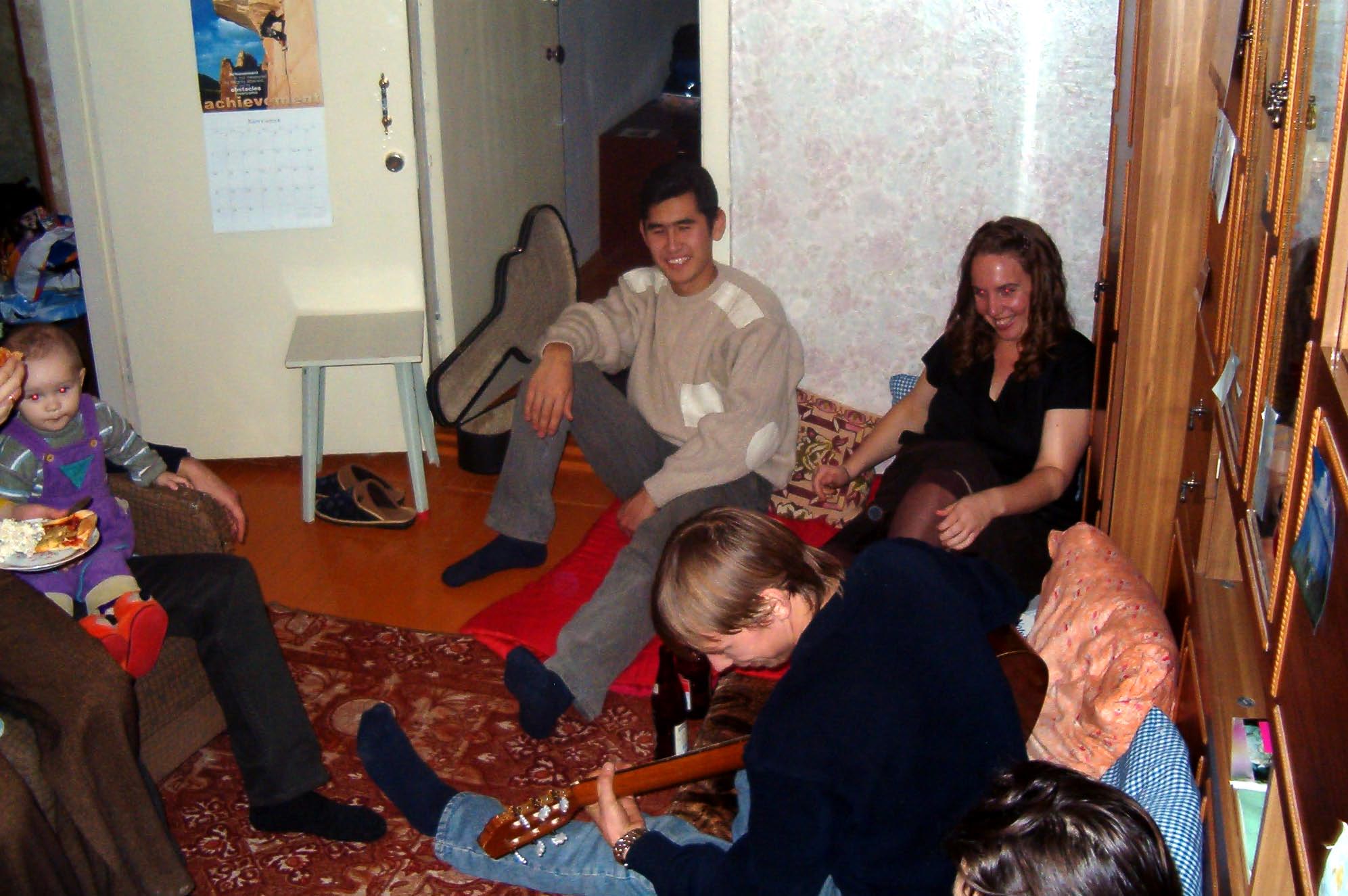 I wanted to ask the young man why his legs were stretched out in front of him as he spoke. I didn’t, though, afraid it might seem confrontational rather than merely curious. But, this Kazakh man with outstretched legs intrigued me as he told us that his people considered it rude to sit so. I chalked it up to youth; he could have been about eighteen. Perhaps this was his way of showing independence, or maybe he just wanted to fit in with foreigners at a party.

“When sitting in a chair,” he continued, “men do not cross their legs in the way you do.” He was referring to Westerners. “If they do cross them, they do it like this,” and I saw him cross his legs at the knees, the way American women in skirts do.

The party would continue into the early morning, but not with us. As we announced our departure and began to get our shoes back on, Toni asked, “Janet, do you cross-country ski?”

“Well, I’ve done it,” I said, remembering my last time, only a few years earlier. The idea of cross-country skiing around the flat town was appealing. The shoes fit, so we added them, along with the skis and poles, to the bag of books I had also inherited from this soon-departing PCV, and headed down to our waiting taxi. Our two-year accumulation of “stuff” had begun.

How about you? What do you find fascinating about other cultures? What piques your interest? What differences are you curious about?