This past Monday would have been the 89th birthday of Martin Luther King, Jr. Born in 1929, the same year as my mother (sorry Ma; did you want to keep that a secret?), MLK could still be alive and productive today had he not been assassinated fifty years ago this April! He was just 39 years old. Imagine all he might have accomplished given the opportunity!

I grew up in East Orange, New Jersey in the 1950s and ‘60s. Our football team fought Barringer High School (in Newark) every Thanksgiving morning (Go Panthers!).  Back then, East Orange and Newark were what whites would call “heavily integrated.”

Throughout my school years, I had both black and white friends. They were just the girls (and one boy) I liked. Race was, for me, a nonissue. My stuttering came first in the line of “problems-to-worry-about-every-day,” not race.

As I’d get ready for school, my morning radio introduced me to the unrest going on in the South–segregated schools, sit-ins at lunch counters, bus boycotts, marches. We had no such trouble in my northern town. To my mind, we were “successfully integrated” in East Orange.

Racism, to me, in the 1950s and ’60s, was something that troubled the South. It was better to live in the North. Obviously.

I went on with my college, then married life, feeling somewhat removed from issues of race. At first, there was a war to end and economic injustice to fight. Then there was a baby to give birth to. And another. Soon, cocooned in my midwestern, upper middle-class, white ghetto, I forgot all about racial issues. Besides, they had all been solved with the 1964 Civil Rights Act.  Hooray!

But over the past year I’ve come to realize the extent to which racism remains alive and well throughout my country, north as well as south.

Come with me as I look a bit closer at racism today.

I’m using the term racism as more than a set of bad behaviors that put non-whites at a dangerous, deadly disadvantage. And I’m using it as more than an ideology that advocates white supremacy policies and practices. Those are easy to identify, to point a finger at, and to holler, “no more.” But I want to step even further back.

I see racism in this country as a part of our culture that whites simply don’t see. And because we don’t see it, because it functions under that radar, racism continues to plague our land. Let’s look at a few things we whites think of as “normal.”

For us, it’s normal to have band-aids the color of OUR skin, to have those free shampoos the hotels give us work for OUR hair, to have whatever manager we ask to speak with look just like us, and to see in the newspaper that by and large the folks who are running things also look  just like us.

I was stopped by a cop on Rt. 84 a few years back going 85 mph in a 65 mph zone.  Between my GRAMMA J license plate and my story of heading home (eagerly) from a visit to the grandkids,  I got off with a warning. THAT’s actually a great story for another time, but also pertinent here because at no time during that entire exchange with the state trooper, did I even think about keeping my hands clearly visible.

That we don’t see the advantages we have is not because we’re bad people. We are good people, by and large; but we don’t see how how skin color impacts us because the color of our skin doesn’t impact us. Being considered Caucasian in the USA is simply not an issue.  Being poor is; being poorly educated is.  But being white is simply a non issue. 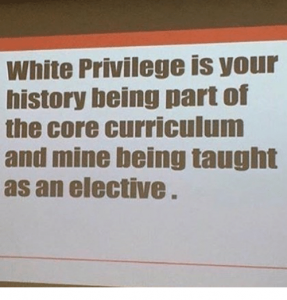 I get it when I hear whites say they don’t understand this “White Privilege” stuff. Here’s what I have come to believe.

If you were born a straight, white, middle-class, able-bodied male, you won the birthright lottery. You are privileged. Surely you appreciate how men have benefited in untold and often unseen ways for the mere fact of their luck. It’s the same for white women (just not as obviously as white MEN; and we still have a ways to go there.)

Still not sure?  Consider these statistics from Francis E. Kendall’s, Understanding White Privilege.

“Unless we believe that white women or African American men and women are inherently less capable,” Kendall states, “we have to acknowledge that our systems are treating us unequally!”

Here in America, we believe in hard work, equal opportunity, and merit. Right? There’s nothing radical there.

But whether we believe this or not depends to a large extent on where we fall along the Successful–Not-so-successful continuum.

Those of us who are successful (however we define success) tend to believe we deserve it. Our inherent ability (how smart/athletic/clever we are) coupled with our hard work/effort has brought us to where we are today, we hold.

Those of us who don’t feel particularly successful, explain our failures in terms of “bad luck,” or “bad genes,” or anything except the absence of merit or effort.  That’s just sociology 101.

For you to acknowledge your privileged status is not to suggest you give any of these privileges away. Yes, acknowledging your white privilege will do little if anything for those who do not share that privileged status. All it will do is make it easier to have a conversation about it.

Then we can talk about racism, tomorrow. 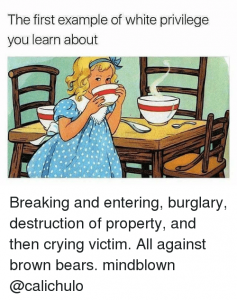 In ending this, I’m assuming my readers are white.  If not, that’s great. Wave your arms wildly and say hello.  But short of meeting you, I’ll just say:

How about you? What does tomorrow’s racism look like to you?

White Privilege: Essential Readings on the Other Side of Racism. Paula Rothenberg. 2018

White Privilege is the other side of racism. Unless we name it, we are in danger of wallowing in guilt or moral outrage with no idea of how to move beyond them. It is often easier to deplore racism and its effects than to take responsibility for the privileges some of us receive as a result of it… once we understand how white privilege operates, we can begin addressing it on an individual and institutional basis. Paula Rothenberg[/learn_more]