Camel’s Hump is one of Vermont’s best-recognized landmarks. Towering above much of the Green Mountains, it remains unspoiled by roads, ski areas, or phony cell tower trees and is a favorite destination for hikers of various ages and abilities. Most of them in good physical condition.

Legend has it that it was originally named Camel’s Rump, and the name genteelly morphed into another part of the anatomy with the arrival of Victorian era settlers. Whatever the anatomical metaphor, she towers majestically above the surrounding ridgeline each time I speed my way north along Rt. 89 between Montpelier and Burlington. I’ve wanted to climb her since I first moved here eight years ago.

Vermont’s own Long Trail runs across Camel Hump’s rocky summit and, according to the guidebook, it’s a four-hour, six-mile hike to the top — with a 2,000-foot gain in elevation along the way.

It would take me eight and a half hours.

Here is the story of my climb to the top on June 24, 2015. Or, rather, my trek to the bottom. It’s the story of the lessons I learned as I made my way down, slowly, alone, and very, very carefully.  I’ll present the story in 12 additional installments over the next five months, weaving in other topics as needed.

Starting out, we were a band of five: my mother, my son David, and my grandsons Elijah (11) and Raleigh (9). Four generations on a half-day trek. What could go wrong?

Here we are, ready to go.  Water bottles and walking sticks at the ready.

Oh yes; we had our dogs too.  Here’s Dave with Palanji (with his own backpack) and Sasha. 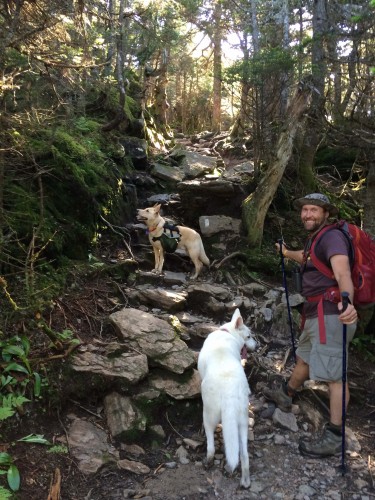 We’d packed a lunch, had water bottles plus a “bladder” that Raleigh carried on his back, and plenty of high energy snacks.  We had leashes for the dogs, walking sticks, cell phones, bug spray, and lots of enthusiasm.

What we didn’t have was time.  A washed out bridge necessitated a rather lengthy, unexpected detour. Long story short, we got to the parking lot at noon. Not our original plan, but for an expected four-hour hike, it wasn’t too bad. We ate our lunch in the car and set off soon after.

The trails were well marked and in excellent shape.  Rustic, to be sure, but well maintained through membership fees to the Green Mountain Club.

Many times they led us through an old stream bed and often we passed man-made water diversion systems, made with logs in some places, or flat rocks in others, all to help direct the water off the trails. I was impressed.

Soon enough, it became clear that my mother’s hike was going to be considerably shorter than ours.  After we bid her adieu (I thought she was heading back), she continued on another half mile (1.7 miles total — she proudly corrected me), then turned around and went the 1.7 miles back to the car.  There, she’d have a mere two-hour wait until the boys showed up because, as it turned out, she got back to the car at about the time we reached the summit.

The summit.  It was as spectacular as we’d heard.  From our perch 4,083 feet above sea level, we could see the Adirondack Mountains of New York to the west (beyond Lake Champlain), the White Mountains of New Hampshire to the east, and the rest of Vermont’s Green Mountains stretching north and south.

To set a goal and achieve it is an exhilarating high.  And, if you have enjoyed the metaphorical roses all along, it’s even better.

But my exhilaration at the summit was tempered by the realization that I still had my descent ahead.  I’d not be skipping over the rocks like the more agile hikers I’d seen.  That much I knew.

It had taken us five hours to get up.  Granted, down goes faster than up. But for some (like me), down is considerably harder than up. There are the knees. And the hips. And the plantar fasciitis that had only recently healed after two years.

Dave and I decided that the boys, the dogs, and he would go on ahead.

So, we took some pictures at the top and, shortly after five o’clock, parted company.

Dave and the boys (and the dogs) reached the parking lot two hours later. My mom took the boys (with the dogs) off for snacks and Dave turned around to come back for me with a better set of hiking poles than my sole painters’ extension pole.  We would reach the parking lot at 8:30, four minutes before the skies opened and an unexpected rainstorm drenched the surrounding area.  Really. Four minutes.

Of my three and a half hour trek down the mountain, the first two of those hours were alone, my body inching its way carefully over rock and ridge.

I hadn’t gone long when I realized this phrase was running in a loop through my head:

When the going is difficult, each step we take is of equal importance.

I knew I needed to pay attention to my footing, diligently. I would take no step for granted or haphazardly, no matter how short the stride, or how flat the surface. I would be very careful.

When the going is tough, each step we take is of equal importance.

I heard it again, thought that’s not unique to the mountain, and began to think of other settings besides mountainsides where the individual parts of the whole hold equal importance: links in a chain, members on a team, students in a classroom, votes in a ballot box, atoms in a molecule.

When “grains of sand on a beach” flitted through my head, I knew I’d lost control of my metaphor.

Fortunately, another adage began looping its way around my head, then another.  Before I reached the parking lot, I’d collected a slew of “life lessons” that fit my situation as I picked my way down the path, “life lessons” that were, I thought, as apt off the trail as on.  I took pictures too.

Over the next few months, I’ll share my list of “Life Lessons Gleaned Hiking Down Camel’s Hump.”  And, in keeping with the cultural icons of my generation, I’ll list them Letterman-style.

Each will be short and accompanied by one of the photos I took before my phone died.  I hope you’ll add your own real world examples to my trekking down the mountain lesson.

Here, once again, is the first lesson, counting backwards:

#13   When the going is tough, each step is of equal importance. 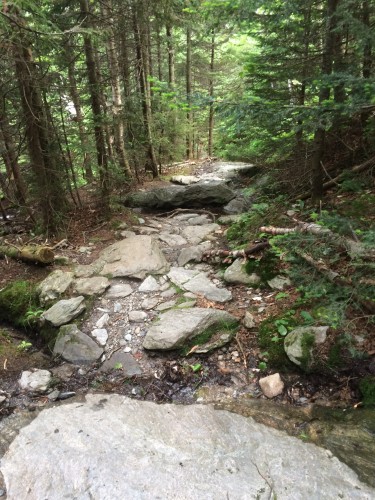 How about you? What parallels to real life does this lesson bring to mind? Have you had some “tough going” in your life? Were the steps you took to get you through that time of equal importance?