Four women came from different parts of the country to join me in my rental property on Chincoteague Island, Virginia last week. It quickly came to be known as the CincoChincoChics Retreat (first annual?)

We were together seven days: seven breakfasts, lunches, and dinners; and seven mornings, afternoon, and evenings.

And it was grand.

We hadn’t planned much in the weeks before we met, only learning each other’s food idiosyncrasies and that each of us would be responsible for one dinner. We ate out twice and had five slow-food evening meals:

From Janet:  This recipe, from Weight Watcher’s Comfort Foods cook book, serves four.  I doubled it and we had leftovers for lunch one day. (I also replaced the fat-free items with tasty ones).

Heat the oil in a large nonstick saucepan over medium high heat.  Add the onion, bell pepper, and garlic.  Cook, stirring occasionally, until softened, about 5 minutes. Stir in the beans, tomatoes, chili powder, cumin, oregano, and salt; bring to a boil  Reduce the heat and simmer, covered, until the vegetables are very tender, about 30 minutes.  Serve with the cheese, sour cream, and scallions.
[/learn_more] [learn_more caption=”Caramelized Onion, Mushroom, CheeseFrittata — Tuesday”]

From Joan Z Rough:   Caramelize 2 medium to large sweet onions in butter, until a golden brown and set aside

In the pan that you will cooking the frittata in, melt 2 TBSP. butter and saute about 8 oz. sliced mushrooms, a handful of sliced red, yellow or green pepper, and any other vegetables that appeal to you.  When the veggies are just beginning to soften add a big handful of chopped Italian parsley, a TBSP. of chopped fresh rosemary, one or two minced cloves of garlic, salt and pepper,  a big handful of fresh greens, such as kale or spinach, any left over precooked vegetables you have.   Add the caramelized onions and take off heat.

Beat 1 dozen eggs, adding salt and pepper and pour over the vegetables.

Sprinkle the top with about 1 cup of shredded sharp white cheddar cheese or any other cheese you desire. Place pan back on heat and watch carefully as it begins cooking.  You can run a knife around the edge as the eggs set.  When the eggs are almost completely set, place the pan in the oven and bake until the frittata is puffy, and golden brown.  Serve with a fresh green salad.  This feeds 4 to 6 people. 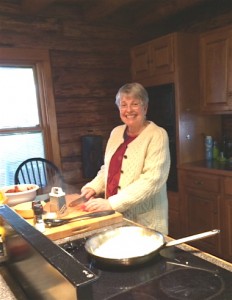 Cut baked potatoes lengthwise to add the stuffing ingredients, which have been sautéed in 4 tablespoons of butter and 1 tablespoon of brown sugar:


From Shirley Showalter:  Sauté one onion in a pan. (in bacon fat!)

Chop into pieces and cook two heads of organic broccoli. Cook until soft. Add two quarts of organic chicken broth. Then use immersion blender to turn into smooth soup.

Add a heaping teaspoon of cumin. Salt and pepper to taste. I would have used curry if it had been in the cupboard.

Voila! Can add potatoes and carrots to this soup for variety and a little more substance.

Dressing. Equal parts mayo, sugar, and vinegar, about 1/2 cup each, whipped together with whisk.

Can be mayo only. 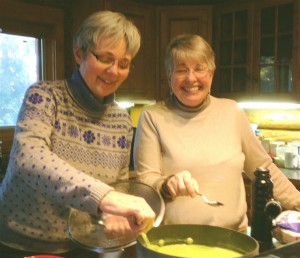 From Kathy Pooler:  Saute one medium onion, 3 cloves of garlic  ( more or less to your liking) and bacon bits in olive oil. You can use chopped pepperoni aa a substitute for the bacon. ( 1/4 cup is enough for flavor)

Rinse two cans of cannellini beans and add to liquid. (I have substituted garbanzo beans or great northern beans)

Mix 1 cup of grated Parmesan or Romano cheese with 1 T. parsley, 1/2 tsp of oregano and a pinch of cayenne pepper, salt and pepper and to the pot.

Add greens—spinach, kale, escarole. I use half a bag of frozen spinach.

Boil ditalini or any kind of small-sized pasta (i.e., elbows) separately and add to soup at the end. 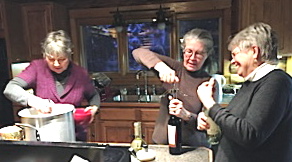 We had a salad with every meal (and wine), and consciously had no desserts except ice cream one night when it just “fit” and Shirley’s yummy apple “pie.”

Not since my years with my colleagues in Kazakhstan, have I felt such sustained joy in the presence of other women. 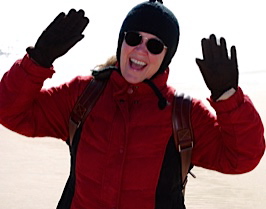 As I wrote in the final chapters of At Home on the Kazakh Steppe, I’d been afraid I’d never again find such camaraderie as I had with my colleagues. But after this weekend, with these four particular women, I know better.
Magic happened when we put our egos on the shelf. For one week, we focused on connection, companionship, generosity, kindness, respect, and fun. And, oh yes, we got a LOT of work done too.

Here’s a recap of how our week shook out.

We chose the warmest day of the week to hike on the beach, 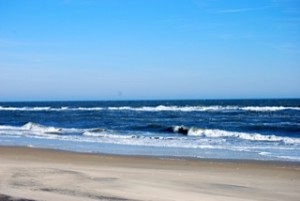 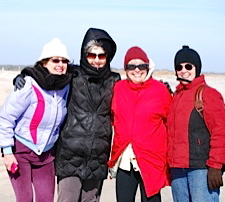 which, because of the wind, became a hike on the Woodland Trail, 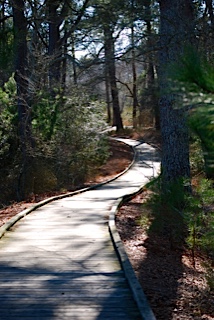 to see the ponies 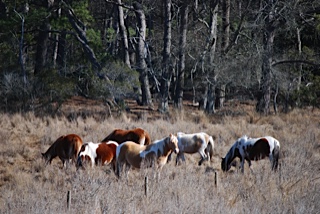 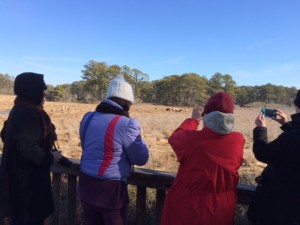 which led to a hike on a second side trail to see the water,

which turned out to be the wrong trail, resulting in a call for an unanticipated rescue vehicle.

Our one-mile walk on the beach had, according to someone’s pedometer, turned out to be three times the distance. For one of our party, that was simply too much. 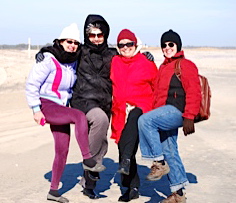 We fixed our own breakfasts and lunches and wound up together on the sun porch overlooking the canal, visiting, exploring ideas, and telling stories as we ate. And laughing. Always laughing.

Following each breakfast and lunch, we were on our own to write, read, edit, or explore. 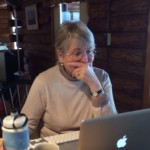 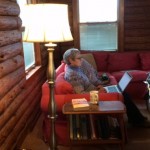 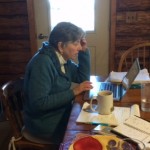 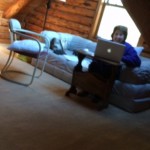 Some took writing breaks and walked around the neighborhood. Here’s a shot that Shirley took at the end of my street. 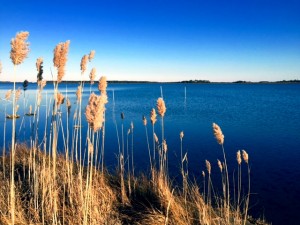 After dinner, we gathered more formally in the living room. From 7 to 9 (or later), one of us had the spotlight: an opportunity to talk about, ask about, or read to the rest of us whatever she wanted.

Here’s Shirley exploring her “box in the basement” with us. 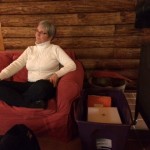 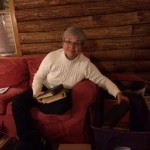 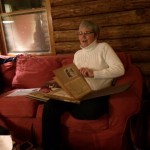 We each sought clarity in these sessions and, from all accounts, we each got it.

We also got to know one another in a new way during these talks. We learned of our early struggles, our future goals, and our ever-present challenges.

When it was my turn, I got a surprise.

After getting feedback on a few “shimmering images” I’d written, I asked about my blog. These were women whose opinion I trusted.  My blog had been, after all, how I’d come to know them. And last week, my blog had me stymied.

“I thought I knew you,” came the important comment. “But you are much funnier, livelier … in person.” It didn’t take us long to go from that to laughing about the possibilities in store for me as And So It Goes (“what does that mean?”) became

“But I did that with that breastfeeding one,” I protested, referring to my post of January 28, Bringing Cultural Differences Home. And I waxed on about how that story had first landed on me: with a gulp and a gasp and an OMG or two.

“Write that,” exclaimed the blonde one. And she gave me a homework assignment!

As a result, “eyes high on my forehead” and “eyebrows in a permanent arc” shall live forever in my blog of February 11, Breastfeeding Six Year Olds.

I don’t know if I’ll be able to maintain my newly unveiled voice of mirthful irreverence in isolation. This part of me, what these women called my sense of humor, doesn’t appear on demand. It’s not like I control it. Instead, I feed off the straight lines of others and I’m not sure I can feed alone (in the tank, as it were).

Time will, as it generally does, tell.

Today’s post is coming one day early so that
the women I mention below can coordinate our blog posts.
I’ll be back to my Wednesday schedule next week.

I’ll close with two of my favorite photos from our week and some links.

From the left, with links to their website/blogs, are: Joan Z Rough, Kathy Pooler, Shirley Showalter, and Marian Beaman.

For those of you who normally follow all five of our blogs, I can only say,  “Hang in there. And notice the differences.”

We all experienced the same week together; yet, we will invariably have remembered it differently. I’m eager to learn just how. I hope you’ll visit their sites too and see just what these differences are. After all, isn’t it the differences among us that makes life interesting, gives it its spice?