For weeks Gulzhahan had been reminding me of the “Sixtieth Jubilee” to which Woody and I were invited.

Invitations, if offered at all, usually came a day or two ahead. Since hers had come weeks ahead, I knew it was important to her that we go.

Kazakhs didn’t have calendars before the early 1900s and, as a result, “I was born when the grass was low” was more common than a specific date. Birthdays were a Russian contribution to the culture. Here was a birthday party so big they dubbed it a “jubilee,” a word I’d never used, so, I figured it was another British convention, like switching the “er” to “re,” adding that extra “u,” or even using “loo” or “flat.”  I was learning a lot of Britishisms, since it had been British English my teachers had been taught.

Back to the story of the 60th Jubilee.

The party center was within easy walking distance of our apartment. As we came in, I saw the sixty-year-old birthday girl, a Kazakh history teacher at my college, standing near the door, greeting her guests. I walked over to say hello and give her the gigantic Godiva chocolate bar I’d brought from home for such an occasion. Our Peace Corps trainers had emphasized that chocolate was always appreciated.

She took the bar with a gracious, if tentative, smile and set it down on a nearby table. I saw no other presents anywhere. Again, naïvely, I expected presents to be front and center at a birthday party. I got presents at my birthday party, after all. And there was a set time during the party when I’d open them. Didn’t everyone do it my way?

Kazakh gift giving, I’d yet to learn, was less focused on the gift than was American gift giving. There would be no watching while the giftee opened. No showing of their glee at my excellent choice, and no fun — and highly impractical — gifts. Poverty, more than tradition,  colored their gift giving customs in 2004.

As Assem would tell me during my second year, “We seem greedy if we show too much pleasure.” How different from the overt American glee I was used to.  In Kazakhstan, guests would contribute money ahead of time so that these lavish affairs could afford to be held.

But I knew none of this the night of the Sixtieth Jubilee. As it turned out, there was much I didn’t know.

Tables of ten were set in the standard way: bottles of vodka, brandy, wine, mineral water, and juice stood in opposite corners, like twin sets of bowling pins before the first ball is played. Salads galore, big baskets of bread, and candies were thrown helter-skelter to be sure that little of the tablecloth showed.

That night, in addition to my six colleagues and Woody and me, we had two other college teachers at our table, neither of whom spoke English.

The bishparmak was also different. Rather than beef or lamb, we had horsemeat, served on a bed of rice rather than the noodles I usually saw. Imagine making homemade noodles for over 600 guests!

Except for the huge sausage along one side of the plate, which I knew was kazy, — horse sausage stuffed inside the horse’s penis skin (some said the intestine was used instead; seemed an insignificant difference) and actually quite tasty — my first horsemeat looked no different from the beef or lamb I was used to. I was eager to try it. 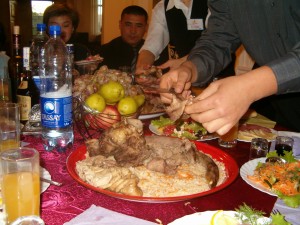 I’m tempted to report that it tasted just like chicken.  I’d be wrong.

A dozen women asked Woody to dance and he used any one of a number of explanations, all true, to decline — his feet hurt, he was hot, he was thirsty, he was tired — but they just insisted harder. For women raised to be demure, they showed an unexpected assertiveness. 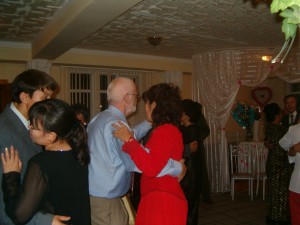 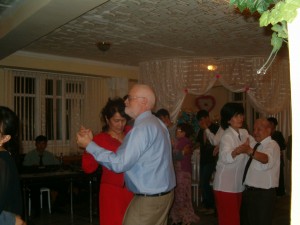 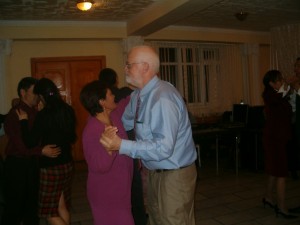 He wound up dancing with every one of them and he was not happy — until it was time to toast.  Woody loves to make toasts.

The microphone in the front of the room had been kept busy with numerous toasts throughout the meal and in between dances. After some time, Woody turned to me, “It’s our turn.” I had no idea how he knew this.

We walked to the microphone and, in Russian, he introduced the Malvina Reynolds’ song “Magic Penny” that would become our standard offering at such events. Woody hadn’t brought his guitar so we sang a cappella. He began so I could hear the key, then I joined in.

Love is something, if you give it away, you end up having more.

It’s just like a magic penny. Hold it tight and you won’t have any,

Lend it, spend it and you’ll have so many. They’ll roll all over the floor. So…

let’s go dancing till the break of day. And if there’s a piper, we can pay

For love is something if you give it away, You end up having more.

Following hearty applause, someone handed us gifts: a long Kazakh robe and sash with a matching hat in bright green for Woody, and a third velvet vest for me in as many months, this one a deep red.

More dancing, more toasts, more food. The evening went on well past midnight and we finally made our exit. But leaving also had its challenges.

No one would let us walk home alone.

Just a short walk, six blocks at the most, but we were accompanied the entire way by two very attentive young men, strangers whom we’d never seen before, who didn’t speak a word of English, and who, if we ever did see them again, we certainly wouldn’t recognize.

They knew where we lived and saw us inside the building before they waved a “das v’don ya” and were off into the night.

And so did their tolerance for our repeated missteps.