Last week, I ended What I’ve Learned From the WordPress Wars  with the question, “Why can’t we talk dispassionately when we disagree?” 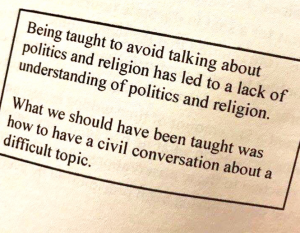 Today, we’ll take a look at my theory, in two parts (two and a half, actually).

1. Let’s start with our brain.

In a post I did in 2016 (Blame It On the Oxytocin), I introduced some of you to the “anterior cingulate cortex” (ACC) — the seat of our emotional reactions. I’ve learned a bit more since then and, as a result, we can now go deeper.  Deep breath.

What we really need to appreciate is the amygdala, a tiny almond-shaped lump that is part of the more ancient portion of our brain that functioned back when Og (the farmer) and Pong (the hunter) were waring over turf.  Our basic emotions, the ones that deal with survival — flight, fight, or freeze — are processed in that ancient, primitive, part of our brain: the amygdala. It’s a bit scary when you think about it. Dangerous even.

But don’t be discouraged. We’ve come a long way since Og and Pong roamed the reeds. These days we also have a prefrontal cortex where poetry, music, art, and language are born; where cognition is formed, and where reason resides. We have the capacity to be more than our reactions. We have the ability to be thoughtful.

But do we? It’s sometimes not as easy as it sounds.

When you believe as I do, whatever cockamammy idea I’ve presented, my belief is validated. And if my belief is right, I am right; I am validated. Yay me; let the oxytocin flow. (a not so subtle reference to that blog post Blame It On the Oxytocin)

When ten people believe as I do, it’s even better. But, if you — and those others — believe something different, if I am not validated, then perhaps I’m wrong. But more easy to believe: you must be wrong. And to be wrong is dangerous when the cerebellum (seat of that little, ancient amygdala) is calling the shots.

Think about it. Our ancestors, Pong and Og, had to be able to tell friend from foe. The quicker one was able to identify that foe, the longer they lived, and they reproduced. That’s sort of an evolution 101 in CliffNotes form.

Here’s another way to look at it. The story is as old as time.The Jets and the Sharks (a la West Side Story) were just a modernized version of the Montagues and the Capulets.  And then we have the Old Testament — filled with such conflicts.

Not so long ago, we’ve had Nazi Germany and the Hutus vs. the Tutsis. Today, it’s the Syrian Government vs. the Rebels, the Palestinians vs. the Israelis, Iraqis vs. Kurds. That humans can be devastatingly inhumane is not new.

In our own backyard, we’ve got conservatives and liberals, political activists and apolitical citizens, and the list goes on: vaccinations, GMOs, gun control, abortion, tax relief, the list of topics that divide us goes on.

For me, when the question is only who is right and who is wrong, we get nowhere.

From where does this compulsion to prove we are “right” come from?

2. (b) Our need to be “right,” to be validated, is our automatic default mode.

Being  right is valued in our culture and has been the foundation of our educational system. Think about it. “Right” answers get rewarded in school; “wrong” answers get sanctioned. It’s the rare teacher who knows how to welcome and reward the well-asked and creative question.

We’re bombarded with “rightness.”  TV news is replete with mindless pingpong games of “I’m right; you’re wrong” talking heads. As though it really matters any more.

Being “right” affirms our self-worth; it validates us. It reminds us we belong. And it assures us we are not wrong.

Why is being “wrong” so painful? Why is being uncertain so difficult? Why does ambiguity throw us for a loop? I’m guessing that’s our cerebellum in charge.

If we allow a bit of cerebrum to intrude, we might just discover the joy of learning for learning’s sake, the freedom to sit in uncertainty because it allows the unexpected. And it may help us grow.

My need to change someone’s mind is a valiant attempt by my primitive amygdala to protect me, plus my need to know where I belong and the result of the programming I got growing up that being right was vital to my success.

For the past twenty years, I’ve turned to a mantra that has helped.

I’d rather be happy than right.

In 1992, during the Los Angeles riots that erupted following the acquittal of the four policemen whose beating of Rodney King was videotaped and shown across the country, King, famously asked, “Can’t we all just get along?” I think we’re getting pretty close to an answer.

How about you? Today I’ll let you ask the questions.

P.S.  Since writing this post, I’ve come across this interview on  Krista Tippet’s On Being, which speaks to the same idea, but in more poetically hopeful terms.