I wanted to understand Kazakhstan, but it wasn’t easy.

More to the point, I wanted to understand the people who now called Kazakhstan home.

I learned enough early on to know Kazakhstan and America were similar in many ways:  Both

The Kazakh histories I’d found focused on the land during the reign of the Saks: the blue-eyed blondes in residence long before the Kazakhs got there and who, scholars say, died out long ago. The famous “Gold Man,” the mummified corpse discovered in the foothills outside of Almaty in the early 1960s, was from this era.

That didn’t help me understand the people I’d met and gotten to know a bit.  Many were descended, they’d tell me proudly, from those nomads of old who wandered the steppe in search of grazing lands for their various herds.

There were a total of 126 different ethnicities, we were taught.  And all were proud of their heritage. 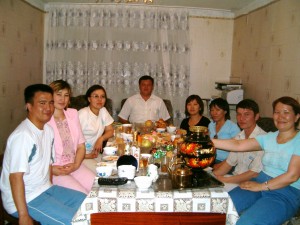 Gathered around the dastarkhan for chai.

Citizens of Kazakhstan carry identification cards that list their particular “nationality.” The people I met identified with and were proud of their “nationality,” no matter how many generations separated them from their homeland. It was odd for me to make these ethnic distinctions, ones I didn’t make in the US. But they would have felt insulted unless I tried.

Cossacks, for example, are often confused with Kazakhs. Cossacks, Russian and proud of it, are historically a branch of the Russian Tsarist army. They adopted the Cossack name from the bands of nomads to the south, the Kazakhs, known even then for their bravery and horsemanship. Many Cossacks came to Kazakhstan through the Russian military and stayed, just as other Russian settlers did. And there are still pockets of Cossack Russians living in and around Almaty.

Uzbeks and Uighurs, for another example, are also proud of their ethnicity, and it isn’t Kazakh. Tatars and Latvians don’t call themselves Russian; their ancestors were from Tatarstan or Latvia, therefore they are Tatar or Latvian. Koreans are Korean still; Germans, German. You get the idea.

In Kazakhstan, I never did find anyone calling herself or himself a Kazakhstani. Proud to live in Kazakhstan, yes. Plenty are proud of their new country. But their identity is still tied to their ethnicity, (what they call nationality). With the Kazakh people, this is easy. They are Kazakh, descended from nomads and Ghengis Khan, and proud of it. It’s the other 125 ethnicities that made it so confusing.

The US has African-Americans, Asian-Americans, Hispanic-Americans, and Polish-Americans among many others. In Kazakhstan, with 126 different ethnicities when we were there, there are no such hyphenated identities.

Our African, Asian, Latino, and European immigrants morph, eventually, into Americans. Whether you adopt the melting pot model or the mosaic, these diverse populations, over time, become citizens of one country. But in Kazakhstan, this hasn’t happened yet. No one refers to himself or herself as Kazakhstanis, the official word for “citizen of Kazakhstan.”