For the next few weeks (or months) I’ll be popping in on Fridays with a Deleted Scene from my memoir, At Home on the Kazakh Steppe. Let’s call them the “lost deleted scenes.” As I put together my new ebook of Deleted Scenes from my blog, I’m finding ones that never got blogged.  So, Fridays will fix that.

Here’s one from our initial train trip, August 2004, that speaks to the beginning of friendship, my current theme on my Wednesday blog. There won’t be a question prompt at the end, but please feel free to share, comment, or Like as you wish. See you next Wednesday.  This weekend Woody and I are off for an anniversary weekend and I’m leaving much of social media behind for three days.

The window in our little koopay won’t stay up. I move to the aisle, looking for a window I can open.

The steppe that I see through the dirty windows that line this side of the car is flat, barren, and seemingly endless. I find it remarkable that this land supported a large and active nomadic culture only a little more than 200 years ago.

Inside the train, the curtain rod falls down when I bump it, but the café curtains I now hold in my hands have been ironed; maybe not this week, but they’ve been ironed and I’m impressed.

I can’t get the curtain rod to stay up when I try to replace it and, as the late August heat leaves a film of sweat over my entire body, I can’t even get the window to open.

“Gulzhahan,” I call toward the koopay next to ours. “How do I get the window open?”

Gulzhahan is my counterpart, an odd word but one I’ve gotten used to in the week since I met her. Next to her, I’m tall at 5’4” — the first time I’ve ever felt tall. Her shiny, short, black hair fits her round, slightly dark face closely, a good cut for her. The women in this country have the most beautiful hair: straight, dark, shiny, and thick. They could make Breck shampoo ads back home, if there still were Breck shampoo ads. She’s quite western in her dress and mannerisms. Except for her British accented English, she could pass for an American.

“I’ll get the conductor,” she answers and goes off to find the one assigned to our car.

Among the many superstitions here, many consider it dangerous to open a window in hot weather. Not Gulzhahan. I’m eager for a breeze and grateful she sets superstition aside.

She is a Kazakh woman of twenty-nine and I felt comfortable with her the first time I met her, just the week before.

Peace Corps creates pageantry whenever it can, I’d noticed, and the moment we Peace Corps Trainees met our counterparts was such an opportunity. Peace Corps staff had herded all 42 trainees (we wouldn’t become volunteers until our official swearing-in at week’s end) into the courtyard of the hub site where we waited.

Soon enough, the doors of the nearby gymnasium flew open and out poured a second mob of 42, waving photos of their volunteer wildly over their heads. These yelling, screaming, newly initiated Kazakhstani English-teacher counterparts played their role well.

I had no idea what my counterpart looked like, but I quickly saw a little dynamo heading my way laughing and jumping and waving my photo in the air.  My passport photo!  She found me and we hugged and jumped up and down together giggling as though we had known each other all our lives. Up until then, I couldn’t remember the last time I had giggled. 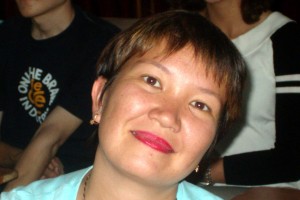 Peace Corps paid for “luxury” koopays — private rooms for four with a lockable door — the highest of three levels of seating, though far from what most Americans would call luxury. 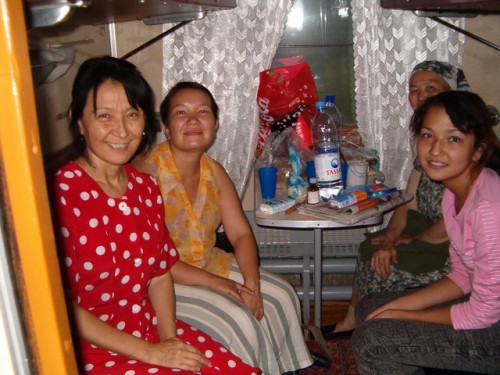 Following our supper inside our koopay, I drop in on our colleagues next door. They invite me in for a friendly chat: five adults packed into the space we take for two and not in the least resentful. I’m embarrassed but I say nothing. I’m an American.