For me, the new year represents a chance to put behind me the many missteps I’ve made this year and start over. A chance for another new beginning,

I’ve had a full year of bad decisions. Mistakes. Regrets.

For someone who prides herself on her willingness to jump off the high dive and “figure it out on the way down,” I expect a few bad landings.

But as I look back on 2015, I made the same bad decisions in February and March that I made in November and December. Did I learn nothing?  My missteps are bookends to my year. And I can’t wait for it to be over.

I’m not looking for the high points of 2015. Those are easy to find but they don’t teach me much. Instead, I want to understand the low points, the decisions I wish I could do over. 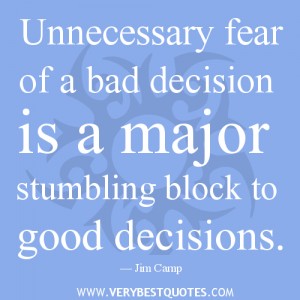 It’s a preference I’ve had too, for many decades.

I’m a jumper. I climb the high dive ladders, I look around (more so since my years in Kazakhstan, as those of you who’ve read my book can attest) and I enjoy the view. I make sure there is water down below — I’m not suicidal — and then I jump.

If I’m going to make a mistake, it’s going to be because I went ahead and jumped, not because I climbed back down.

We’ve all had to fall when learning to walk. Imagine where we would be if we’d never tried!

Without bad decisions, without mistakes, without regrets, how can we be sure we’ve lived life to the fullest?

How would we know how competent we are, what we’re fully capable of ?  We have to push on, test our limits, try, and yes, fail sometimes too.  Then try again. 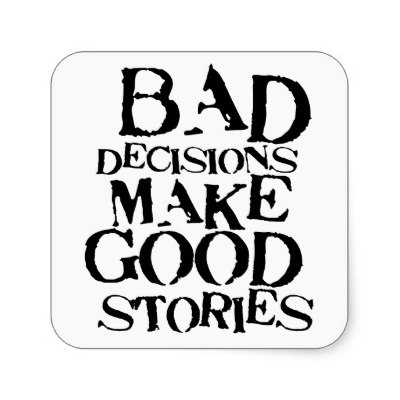 Now I’m not advocating we dwell on our regrets. Not at all. That’s a waste of energy.  See them, own them, learn from them. Maybe write a story about them. Then move on.

They seemed like such good ideas at the time.

Isn’t that usually the way with regrets? They seem to be the right thing in the moment. I’ve never met anyone who charges into a regret saying, “Let’s see how badly this turns out.”  No, we tell ourselves what a good idea such and such is …

My regrets have evolved over the years.

Maybe yours have too. I’ll summarize what I’ve learned from mine.

Ages 0 – 19     The mistakes of early childhood simply don’t count, for anyone.  We’d all better make mistakes then.  We’re expected to make mistakes, certainly through adolescence. My real regrets from this era, the ones I remember, stem from a lack of self-confidence. And that’s OK too; if I’d made different decisions back then I’d not be here in my little stone house in rural Vermont writing this blog. I love where I am today. And my mistakes helped get me here.

Ages 20 – 39    These were the years when my hormones ruled my brain. Mix that with a continued lack of self-confidence and you get a wealth of mistakes, a torrent of regrets. Lots of stories to tell, too. Published postumously of course.

Ages 40 – 59    I grew up during these years. And I learned to love myself. But I did it in a whirl of activity. My mistakes here are linked to my inability to sit still. “God grant me patience and grant it to me now” would have made the perfect bumper sticker for me during those years.

Ages 60 — present    The mistakes I’m making now are generally connected to the assumptions I’m making, the expectations I’m holding, and belief in things that simply aren’t true. And when I look even closer, they all involve technology and my print book’s availability to be sold.

2015 was a year that began and ended with the poor choices I made in the technical aspects of editing, formating, and publishing my book. Or should I say, “reediting, reformatting, and republishing” my book?

Throughout the year, I found myself faced with choices about

From last February — when I took over the publication rights from Ant Press without fully understanding what I needed to know — to early December — when I added three additional pages of review excerpts, throwing off the pagination in the front matter — 2015 has been filled with technological challenges the likes of which I hope to never see again.

I’ve been brought to tears on three occasions. I’ve thrown up my hands and declared defeat twice. And I’ve spent every dollar of profit I’ve made and then some.

I was my own worst enemy. And some day I’ll find the humor in it all and write about it.  If I can remember any of it by then.

Today, as I look back over 2015, I know that the changes in technology are happening at a pace I am unable and unwilling to keep up with.

I’m tired of reading the “how to” articles and books, only to find that a new one comes out three months later with newer information.

No more “How To” books. I’m going to be satisfied with what I’ve got, where I am, and that I’ve put out a book I can be proud of.

And so, in 2016, I will walk away from it all… Once I finish this last print proof and upload it to Create Space.

2015 has also been a year filled with speaking engagements and book signings, serenity and singing, gratitude and glee.  But those stories fail to teach me much that is new. I’m grateful, I say “thank you,” and then I look around for another high dive to climb.

2016, here I come. What have you got to teach me? I hope it’ll have nothing to do with technology.