Today’s prompt, from Rae, theeducatednegra, who introduced it last month on her Rae’s Reads and Reviews is

Two books that remind you of someone

The first two prompts, two that taught me something (week 1) and two that helped me fall in love with reading (week 2) were easy, particularly last week’s.

This week, two books that remind me of someone . . .  required a bit of thought.

First I turned my head to the left and looked over my baker’s rack bookshelf.

So I looked to my right: 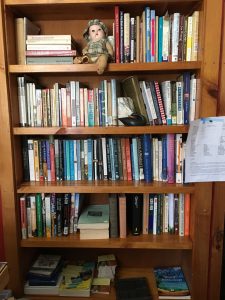 Once I stopped staring at poor Susie, my childhood doll now sporting a disconnected right leg, I knew I was getting warm.

And sure enough I lit on one pretty quickly, though I’m stretching Rae’s intent a bit.

Nora Ephron’s 1975 Crazy Salad reminds me of three people: my second son Jon who was born the following year and the two student nurses from Kent State who guided me through that labor and delivery (natural this time; no more epidurals for me).

I’ve long forgotten their names — the two student nurses; I’m pretty clear on Jon’s name — but I remember being so grateful for their support and at the same time so smitten with this collection of Nora Ephron’s columns from Esquire magazine, I bought two more copies and mailed them to the girls with a thank you note. This was not typical behavior for me.

So I remember them, though obviously not very well. And gratefully, I’ve also forgotten most of that labor and delivery too, though our anniversary of it is coming up in less than a week.  Happy Birthday, Jon. 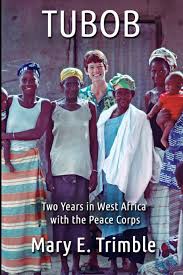 A second glance at the bookshelf to my right and I spot Tubob, a Peace Corps memoir similar to my own though set in Africa, written by Mary Trimble.

I haven’t read it yet, but I know it’s a good book. How do I know? Two reasons. The first chapter grabbed me and I knew I wanted to know more. And thanks to this prompt I’m reminded once again that I want to read it, soon. It’s moved higher on the TBR pile.

Second, and the point of this prompted post: it reminds me of my old friend Ian Mathie, who recommended the book to me. Many of you might remember him too as he was an early and faithful commenter here. For Ian, Mary and I had approached our Peace Corps commitment in much the same way and believed Mary and I should know each other. Ian was like that. And I miss him still.

How about you? Are there books that remind you of someone special?

TOMORROW: I’m really tickled to announce that we’ve got Lindsay de Feliz, a most proper English lady who has lived in the Dominican Republic for the past eighteen years. She joins us tomorrow to talk about the cultural differences she’s faced, both when she first came to the the DR and again, recently, when she went back to the UK for a visit.

Many of you know Lindsay from various social media groups, her blog, and  her two memoirs. You may also know she underwent a traumatic injury two weeks ago and is recovering at home.  Click here to learn of her accident and how you can help. Then plan to meet her here and hear her story. Bring your friends.