Here’s a repeat of last year’s Christmas season blog.
I thought it was particularly timely this year. and as I put it together, a quote from Margaret Mead came to mind:
“Never doubt that a small group of thoughtful, committed, citizens can change the world. Indeed, it is the only thing that ever has.”
May this holiday season find you feeling peaceful, blessed, and eager to get out and change the world.

One Day When Enemies Stopped Fighting

On New Year’s Eve 2012, I was privileged to be in the audience when a small group of performers offered a song I’d never heard. Christmas In the Trenches so moved me, I came home that night and immediately looked it up.  Google, once again, to the fore. 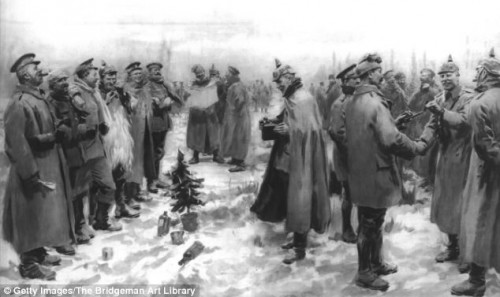 Christmas In the Trenches sung twice
Posted to YouTube by RIDEM25, this 6:28 video takes us through the song twice with orchestration and pictures of WWI sites, plus a few modern era photos of those same sites.

Christmas In the Trenches sung twice, plus singer-songwriter introduction
Posted to YouTube by John Huffman, this 6:49 video gives us the composer himself telling the story of how he wrote the song and how he’d met a few German vets who specifically came to show of his to hear him sing. We hear the song twice, with scenes from a re-enactment of the day and newspaper clippings from the era.

And, if you want to get a fuller sense of the story,
I recommend the documentary/re-enactment, The Christmas Truce.
It’s an hour, but hook up your Apple TV. It’s worth it.
And, unlike Miracle on 34th Street, it’s a true account of the “one day that shook the world.”

A different, seven minute documentary/re-enactment can be found here.