My posting day coincides with World Population Day this week .

We’ll look at the connection between population trends and poverty, explore the call for family planning — this year’s theme — and meet members of my personal contribution to the world’s population (who will be going home tomorrow).

I’m pulling from the UN’s UNFPA page, Population and Poverty. Here’s what I thought was the critical paragraph.

Access to sexual and reproductive health, including family planning, can affect population dynamics through voluntary fertility reduction and reductions in infant and maternal mortality.

When women and couples are empowered to plan whether and when to have children, women are better enabled to complete their education; women’s autonomy within their households is increased; and their earning power is improved.

This strengthens their economic security and well-being and that of their families. Cumulatively, this contributes to development progress and poverty reduction.

Did you know that the population growth rate topped off at 2.2% back in 1963 and has been declining since?  I didn’t.

The second surprise I found has to do with how they measure such things. Our World In Data (dot org) was a wealth of information.

The one I found easiest to grasp (both visually and cognitively) was the how-long-does-it take-to-add-1-billion new people graph.

Yes, billion; B as in Boy that’s a lot of people. 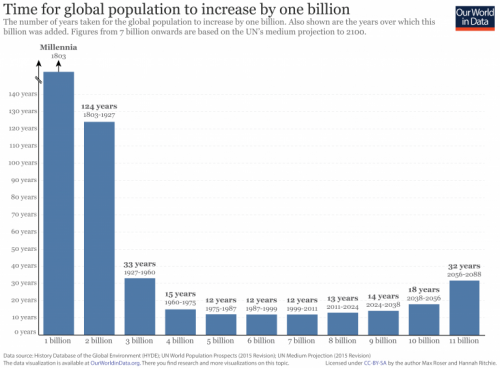 It wasn’t until 1803 that the world reached its first billion; it then took another 124 years to reach two billion. By the third billion, this period had reduced to 33 years, reduced further to 15 years to reach four. The period of fastest growth occurred through 1975 to 2011, taking only 12 years to increase by one billion for the 5th, 6th and 7th.

Things are looking up though.  If we can maintain the slower rate of growth, the period between each billion is expected to continue to increase so that by 2088, it’ll take a full 32 years to add the 11th billion — a long generation.

The other way has to do with how many years it’ll take to double the current population. 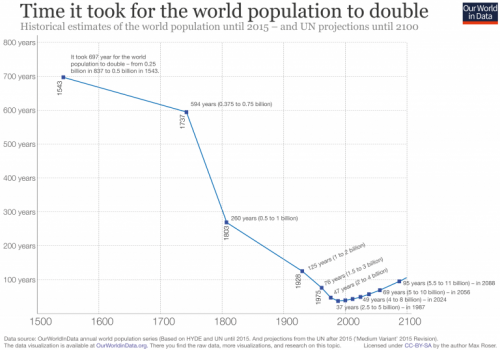 The fastest doubling of the world population happened between 1950 and 1987: a doubling from 2.5 to 5 billion people in just 37 years — the population doubled within a little more than one generation.

No wonder we baby boomers have grown up with a sense of the world spinning fast.

It’s starting, ever so slowly, to take longer for the population to double.  The word is spreading. And, family planning has also been spreading.

Family Planning is a Human Right

This year marks the 50th anniversary of the 1968 International Conference on Human Rights, where family planning was, for the first time, globally affirmed to be a human right.

The conference’s outcome document, known as the Teheran Proclamation, stated unequivocally: “Parents have a basic human right to determine freely and responsibly the number and spacing of their children.”

Embedded in this legislative language was a game-changing realization: Women and girls have the right to avoid the exhaustion, depletion and danger of too many pregnancies, too close together. Men and women have the right to choose when and how often to embrace parenthood — if at all. Every individual has the human right to determine the direction and scope of his or her future in this fundamental way.

Available: Countries must ensure that family planning commodities and services are accessible to everyone.

Accessible: Countries must ensure that family planning commodities and services are accessible to everyone.

Acceptable: Contraceptive services and information must be provided in a dignified manner, respecting both modern medical ethics and the cultures of those being accommodated.

Informed decision-making: Every person must be empowered to make reproductive choices with full autonomy, free of pressure, coercion or misrepresentation.

Privacy and confidentiality: All individuals must enjoy the right to privacy when seeking family planning information and services.

Participation: Countries have an obligation to ensure the active and informed participation of individuals in decisions that affect them, including health issues.

Accountability: Health systems, education systems, leaders and policymakers must be accountable to the people they serve in all efforts to realize the human right to family planning.[/learn_more]

My firstborn was conceived on the hottest day of the year. He was very much wanted, once I learned he was on the way, but more interesting to me, given the heat that day, he was evidently quite determined to get here.

My second son followed at the then-appropriately-spaced three-year interval. He too, was much wanted but he’s more of the que sera, sera type.  “My turn to be born?” I can hear him say. “Sure; why not?”  (I always loved how different my two boys were: same gene pool, very different temperaments).

I’ve learned much from my sons over the years and I’m sure I’ll learn even more as life goes on. For that I am grateful. They came with their challenges as all children do, but they were wanted.

Isn’t that the birthright of all children, to be wanted? Certainly to be loved, cared for, nurtured, and then allowed (encouraged even) to fly so that, hopefully, they can come back for those eagerly anticipated visits.

And then go home again. It’s a cultural thing. (more on this next week)