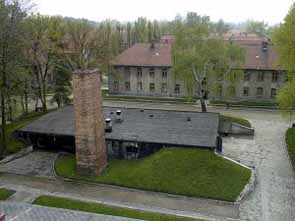 I found this photo of Auschwitz at the Jewish Virtual Museum, a project of the American-Israeli Cooperative Enterprise and a wealth of information on the Holocaust.

Today, January 27, is World Holocaust Victims Remembrance Day, established in 2005 through a resolution by the United Nations General Assembly. The date was selected in memory of the largest of the Nazi death camps, Auschwitz-Birkenau camp, which was liberated by Soviet troops on January 27, 1945.

I hadn’t heard of this holiday when I began organizing my blog posts for 2016. But there it was, on a calendar I had just downloaded. I was intrigued and the question quickly became, how to best honor it?

My first thought went to one of the many holocaust memoirs that I’d read, Corrie ten Boom’s The Hiding Place, and I knew whatever I did, I had to include this book.

I was given this book as a gift in 2001, in The Netherlands.

Before 9/11, before Peace Corps, Woody and I traveled much, giving workshops around the globe to people who stutter and the professionals who work with them. During those travels we always made extra time to visit with the friends that Woody and I had made over the years.

On one such occasion, in the summer of 2001, our friends had taken us to see the home of Holocaust victim Anne Frank. Perhaps that is why, I never asked, but as we were about to walk through our gate at Schiphol Airport in Amsterdam, Sjaantje, my Dutch friend, held out a book to me, saying, “I want you to have this. I think you’ll enjoy it.”

I read it on the plane home. Less than a month later the Twin Towers fell.

Written in 1971 with help from an American couple John and Elizabeth Sherrill, ten Boom’s story is what I thought of in the days and weeks following 9/11.

But there are countless other heartrending, life changing, memoirs from survivors of that horrific time.  Here are the ones that have made it onto my bookshelf, virtual or concrete. I’ll link to the reviews of the ones I’ve read.  (I can see I need to get some more reviews in)

There are hundreds, probably thousands of other Holocaust memoirs. These are the ones that have caught my eye and gone onto my To Read list:

These are the stories of the survivors. And it is only through their words that we come to know the victims, those we honor today.

Can you add other titles that you’ve read or want to read?

You might want to check out these links to The Jewish Eye and Goodreads for more more suggestions.

Let’s read all we can; let’s keep ourselves and the generations coming after us informed.