For the past twelve years, from mid August to mid-September, I have conscientiously and diligently pulled out, by the roots, the many varieties of goldenrod from where they grew along the edges of the woods. This is not a small job: I have 30 acres here in Vermont, though fortunately no tromping into the interior was needed.  Only a pair of garden gloves and a long sleeved shirt. And getting in my back stretches first.

Here is a shot of this year’s goldenrod still blooming along the edge of our woods. See how it stands out, even now a week or two after its peak. 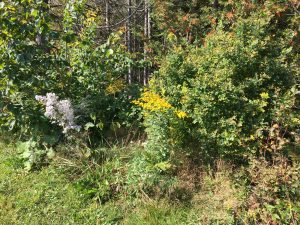 Why was I doing this you ask appropriately. I pulled it out in honor of my son David who suffers from what the doctors call “allergy induced asthma” in the spring and fall. By tearing out the goldenrod by the roots each year, I was effectively killing it off. Eventually, I figured, Dave would be able to visit in the fall. This was my belief.  I never doubted that my actions would produce the result I wanted: an allergy-free visit from Dave.

What a waste of good energy!

However, this is not a post about visiting children (and grandchildren), nor is it a post about living on our Vermont farm, though they’d both be fun to write about.

No. This is a post about beliefs and how we grab hold of them and hang on tight without really exploring why.  I mean, really, who has the time?

These examples are the ones that come most readily to mind as I type this up. Your list might be quite different and just as valid.

What I’m interested in here is how rarely we stop to question our beliefs: objectively, curiously, courageously. We get attached to them, identified by them. And on we march.

To lose that belief is to lose our sense of who we are.

Fortunately, I was not terribly attached to my goldenrod-as-culprit dogma. In fact, learning I no longer had to pull it out was quite a relief. 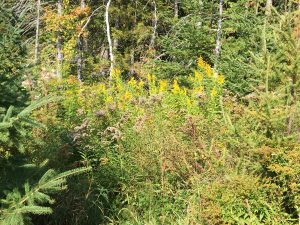 As I mentioned at the start of this little essay, I’ve been yanking out my goldenrod by the roots since we moved in up here in 2007. I was a believer in the badness of this bright yellow wildflower. Our landscaper told me it’d be a good idea and, city girl that I was, I went with it.  Then a carpenter here to do some work convinced me I might be misinformed. So I googled it, just to be sure.

Goldenrod, it turns out, is far too heavy a pollen to get enough lift to land in our noses. Instead, it uses pollinators to move its pollen around. Ragweed pollen, the real culprit, on the other hand, is airborne and flies around until it lands, sometimes on a flower, sometimes in a nose.

Goldenrod, also known as solidago — a genus of about 100 to 120 species in the aster family –has suffered the classic guilt-by-association fate. It also gets the blame because it is much more vibrant in color and more noticeable. It’s what we see. 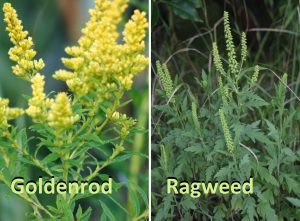 Now if only I could explain the upsides of socialism, vaccinations, and fat with a simple side by side photo.

How about you? What are your beliefs based on?