The blogosphere of late has been filled with lists of resolutions for the new year.

I don’t mind them. I actually enjoy peeking into other people’s psyches. And after reading ten or twenty of them, I began to see a pattern.  I love it when a pattern develops. I love it even more when I see two patterns.

The first pattern I’ll call “Let’s hear it for New Year’s Resolutions.” This is a three-pronged pattern within which lie the vast majority of Resolutions.

The second “pattern” — though I’m now doubting that it’s actually a pattern, per se; but anyway — are those almost-lists that bemoan New Year’s Resolutions. These authors often berate themselves for having once failed to succeed, their past lists have turned into evidence of their failure. Hence, no more lists.

This led me to think about the resolutions I have made over the years. Call them what you will: promises, commitments, intentions, decisions, goals.  We visualize something different (i.e., better), want it, and go after it.  Some we achieve and some we do not. I’m no different.  In last week’s blog, I checked off getting my book published (finally) but, alas, no pea hens. There were goals I’d met and ones I’d not met.

But, I wasn’t concerned about not meeting them.

I also noticed that none of my goals fit neatly into any of those three categories I listed initially above. I wondered if I was missing something. Was this connected in some way to why I still like these lists?

I’m not opposed to resolutions, goals, plans. In fact, I like them. Heck, I love planning. I serve on my town’s planning committee. For over twenty years I worked in non-profit development and was constantly tuned into the need for the “five-year plan.” The love of planning, I think, came embedded in my DNA.

I write on, believing I’ll eventually figure this out.

I have made these resolution lists every year since 1992, beginning when I was given Melody Beattie’s The Language of Letting Go. Every morning for nearly four years, I would read that day’s meditation, write about it, and take it to heart as best I could. I was very fortunate to have the time and the wherewithal to devote so much time to “letting go.”

I think of that time as the years I became a grownup.

And each January 1 since, my writing for that day has included a list of goals for the coming year.

Here’s what Melodie Beattie says about setting New Year’s “goals.”  This is from January 1 in her Language of Letting Go.

Dig within, and discover what you would like to have happen in your life this year. This helps you do your part. It is an affirmation that you’re interested in fully living life in the year to come.

Goals . . . put a powerful force into play on a universal, conscious, and subconscious level.

Goals give our life direction.

Write it down. Take a piece of paper, a few hours of your time, and write it all down — as an affirmation of you, your life, and your ability to choose. Then let it go.

She writes so clearly.

So, I’m wondering if the problem with New Year’s resolutions is that we haven’t really dug into what WE want. As a result, they reflect not so much what WE really want, but those things we think  we are “supposed” to want.

I think too often these lists are designed with the invisible “mother” wagging the proverbial finger and saying “tsk, tsk, tsk.”  (Well, that’s what “should” means anyway, right?)

How ’bout this as a theory? When we set resolutions based on what others don’t like, we set ourselves up for disappointment.

Might the problem come with the forcing, the working too hard to achieve these goals?  It’s something akin to Zen and the Art of Archery, by Eugen Herrigel, published the year (I like to tell people) I was born. 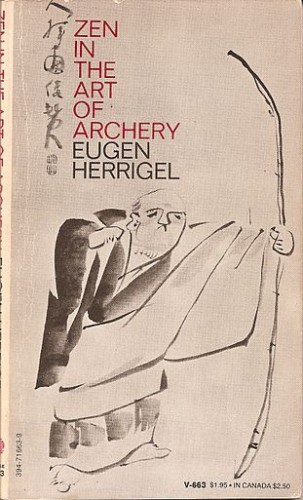 We hit the target when we stop working so hard, stop thinking so much, when we just relax and let the arrow do its thing.

Granted, this is after a gazillion hours of practice, so that the muscles are primed to do what they are supposed to do. Great musicians and famous athletes talk about the same sense of abandonment, of just letting go of trying, of “being in the zone.” I think many writers know this too.  Yes?

I go back to Melody Beattie.  Her first words:

Dig within, and discover what you would like to have happen in your life

Write it down … then let it go.

Stop trying so hard. You know what you want.  Or do you?

[box] Interested in reading At Home on the Kazakh Steppe? I hope so. Just click here if you are outside the USA. It’s the universal Amazon like for the PAPERBACK and eBook versions. If you want the LARGE PRINT or eBook versions, click here. While Amazon makes it easy, you can always order the book from your local independent bookstore. Just tell the owner the book is available through Ingram. And, once you’ve read it, leaving a review on Amazon will help bring me closer to being able to take advantge of some of the promotions.  🙂 [/box]