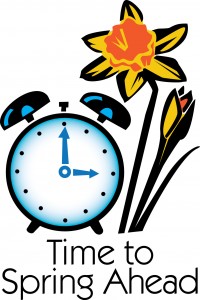 While wandering around the Internet looking for that pleasant little visual, I stumbled across this fun, headline:

. . . the best way to prevent death by Daylight Saving Time may be to make it permanent, according to Standard Time abolitionists.

You heard (read?) right. Yes.  Portlanders are on a roll. This quote from The Oregonian, March 9, 2015, in an article by Joseph Rose entitled:  5 reasons why Daylight Saving Time week is dangerous for Portland area commuters gives the gist:

Advocates of perpetual DST have some statistics on their side. Adding an hour of sunlight in the evening year-round would save the lives of more than 170 pedestrians annually, according to a 2004 study in Accident Analysis and Prevention. The lives of nearly 200 vehicle occupants would also theoretically be saved by the change.

What parts of the US do not follow DST?
A. Arizona
B. Puerto Rico
C. Hawaii and Guam
D. The US Virgin Islands and American Samoa
E. All of the above

For what purpose was DST first instituted?
A. As a means to help farmers
B. As a safety measure during WWII to facilitate blackouts.
C. As a health measure to guard against heart attacks.
D. As an energy measure during WWI to save fuel

Ever since my Peace Corps years in Kazakhstan (2004-2006) when President Nursultan Nazarbayev did away with DST in his country with just a flick of his pen, I’ve been wondering why America doesn’t do the same thing.

Actually, because we live in a democracy — and one whose lawmakers rely on special interest groups for their information (and their money; sorry, I digress) — it’s not so easy to just do away with it. As we all know by now, democracy is not very efficient. I’m not knocking it, mind you. Just saying …

So, given we’ve got special interests lined up advocating for their interests, I wondered who  would these special interests be lining up to defend Daylight Saving Time? Who benefits from changing the clocks an hour twice a year? For it’s certainly not me.  Or you, I imagine.

Before today’s post, I assumed it would be the farmers. I can still remember one of my high school teachers telling us that DST would enable farmers to have a longer time for their harvest. And, given that the U.S. extended DST during the energy crisis of 1973-74 (I remember that too), I thought probably DST saves energy. I also figured it must be popular among the majority for it to still be around.

Back in 2013, when I first began these DST rants, I turned to the Internet for verification. And I found out I was wrong on all counts.

My first stop was an article from National Geographic magazine of November 3, 2013 from which I learned the following

Golf?  How many Americans play golf?  What other industries benefit, I wondered. Then read:

During that same time (one extra month of DST), the U.S. barbecue industry pegged their increased profits at $150 million for that same additional month. [sic]

That figures. More time for barbeques.

These are all quotes from the article. I didn’t make any of this up. Honest.

So, that’s who is lined up advocating for DST:  golfers, barbequers, and the oil and auto industries.

There’s an organized opposition to Daylight Savings Time too.

Not nearly as well-heeled as the pro-siders, but it turns out the farmers want an end to this biannual clock change, particularly the dairy farmers. Seems their cows are a bit put out with the time change.

Quite a few religious groups (particularly orthodox ones) whose prayer schedule is also based on the sun not the clock wish it would go away.

Teachers (officially, the PTA, so maybe it’s more the parents) want to see an end.

The TV industry is opposed to DST. The most popular shows, according to the Nielsen ratings, go down by 10 – 15 percent in viewership during the first week of DST. I imagine they wouldn’t care if we did DST all year or not, just so we didn’t touch the clock.

The Obama White House tried to do away with it too, but failed to get the required number of signatures. Too bad I didn’t hear of it.  I’d have gone door to door!

Researchers at the University of Utah came up with an impressive economic downside from Daylight Saving Time.

the simple but inconvenient act of changing America’s clocks and devices back and forth represents an annual $1.7 billion of lost opportunity cost. This was based on the average American’s hourly wage and an assumption that each person spent some ten minutes changing clocks, watches, and other devices—time that could have been far more productively spent.

Then there’s the medical piece.

So, with evidence against DST mounting, I pick up the mantle. But, what can I, one lonely individual, do? Turns out there’s an organization dedicated to ending DST. It’s called

Check them out, if you want to join my merry little band of  reformers.

So, how about you?  What’s your stand on Daylight Saving Time?

NEXT WEEK:  Another look back 50 years. What will we see?