This weekend, Woody and I will be heading south for my 50th high school reunion.

I am a proud graduate of East Orange High School (New Jersey), which  also claims Bette Davis, Dionne Warwick, and (I just learned, researching this post) Janis Ian.  I also learned Janis Ian is three years younger than I.  Was she a freshman when I was a senior?

More importantly, should that have been “… three years younger than me?”  I was taught to “fill out the phrase;” this is one of those “I am” cases.  I could rewrite it as, “I am three years older than Janis Ian.” That would solve the dilemma.  But no. I’ll leave it as it is and get back to my high school reunion.

Expectation #1:  I’ll try to find out if Janis Ian was walking the halls the same year I was.

It’s probably traditional to get a hair cut or buy a new outfit for the occasion.  I’ll not do either.  I’m not sure why.  Could be that inner-Scot again keeping me frugal.  There’s also my word for the year:  enough. So, I’ll  just pack a few things in an overnight case, and head out.  And I’m really excited.

I remember a few of my classmates very fondly.  And I am very eager to let them know that.

I remember tough teachers, high standards, lots of extra-curricular opportunities, and the fact that no one EVER teased me about my stutter.  And I’m curious how that can be.

EXPECTATION #2: I’ll get reacquainted with some very nice people.

The high school I attended was in a building built in 1911. 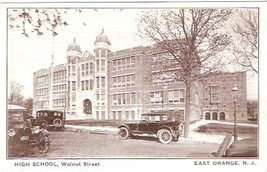 Some time in the 1960s, an addition was built, which housed my science and chemistry classrooms. Mr Van Gilder taught science. His blackboard sketch of the four chambers of the heart —  Two of them connected to the lungs, the other two dealing with the rest of the body — remains fixed in my brain.   Why is that?

I don’t recall my chemistry teacher except that he was opposed to the newly introduced fluoride in the water supply.  And he gave me 200% for a paper I did on air pollution.  I still have that paper.

EXPECTATION #3:  We’ll sit around and reminisce about the teachers we recall, fondly.

That’s three more expectations than I had when I set out to write this post.

How about you.  What would your expectations be for such a weekend?