So many musings this week.

The Democratic National Convention is on.

It’ll be a more sober convention this time around, fitting in this sobering time.

I’ve not actually watched it yet as I’m writing this a few days ahead. And I’m wondering now what it is that whomever-designs-these-TV-spectacles wants to capture. Will I feel the same sense of excitement I’ve felt in earlier years (well except for 1988 maybe; sorry Michael).

Right; not much to muse about there. Yet. Let’s move on to a more timely topic.

Today is my mom’s 91st birthday.

How to celebrate? That’s easy. We have certain standards when it comes to birthdays here in the US.

First, I choose a card. 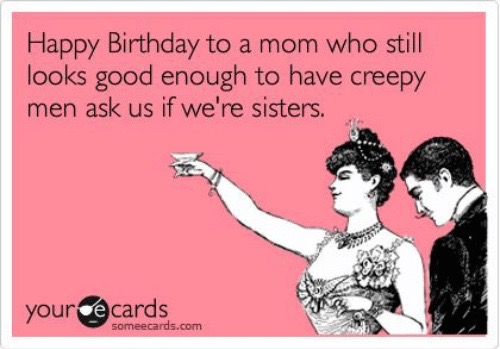 We’ve been taken for sisters for sixty years now, at least. I think we both enjoyed it at first — I got to be older and she got to be a bit younger — but it does get wearisome. Except for once when we got, “Oh, you’re clones!” Now that was different. Unexpected. Funny. But back to her birthday.

I must decide when and where I’ll hold the (sometimes surprising) celebration. This is important for it will set the precedent as my birthday follows in less than a week!  I wanna make it a good one.

Stay tuned for my updates. Then you’ll learn all the various things she does to keep her busy.

UPDATE:  my mom is the one in the long white sweater over the T-shirt that reads

Next year, I hope I remember to NOT schedule the slaughter of our meat birds the day before a party.

Yes, it’s true. We have a new family member (whom I’ll write about some day; just not yet) and it turns out he LOVES to play soccer (football in his lingo). So off we went to the Sunday evening pick up game in our town. And wow; he’s really good. I hear that makes me a soccer mom, which called for some musing.

I can count on two hands (well, maybe three, each) the number of times I watched my sons play while they were growing up.  Why is that? I’m musing.

Maybe it was my own programming; my mother would not have made a good soccer mom, had we even known about soccer back then. And during my own motherhood years, I simply had no thought of it. We lived in the suburbs with two kids; I even had the station wagon and the dog. But this seeming obligation to experience everything your child did never crossed my mind. It appears I may have had little clue on what the norms of behavior were in our white, middle-class ‘burb.

After my boys launched, the phenomenon known as the “soccer mom” — a suburban mother of two, with a station wagon, who tends also to be what some call a helicopter mom — emerged. I assumed it meant these women did not have much else to do in their lives. Assumptions can be dangerous.

Fast forward another thirty years and I now find myself on the sidelines watching Jeffrey play.  (The name has been changed for privacy and other reasons I’ll get to some day.)  It was a perfect summer evening and the first time he’d played in over three years; he made two goals. I enjoyed watching him have fun.

How about you? What are you musing on these days?