It’s a post about the need to expose those dark little secrets to the light of day so that we can begin to heal. Yes, those: the ones we’d rather ignore.

It’s also a post about standing up and being counted so that your simple presence can help others to also stand up and be counted. And sometimes standing up means sharing those very secrets.

Today’s post was formed from the “ME TOO” theme running now across Facebook (and perhaps elsewhere? I’m not as active elsewhere) in the wake of the harvey weinstein accusations. (lower case is intentional).

Someone, bless her heart, had the idea to let the light shine in on just how pervasive a problem sexual predation  is.  Every morning, my Facebook feed is filled with a dozen or so posts declaring “Me too.”  I imagine you’ve seen them as well. Occasionally, the women tell a bit of their story; usually, they just stand tall and say “Me too.”

If all the women who have been sexually harassed or assaulted wrote “Me too” as a status, we might give people a sense of the magnitude of the problem.

[I’m pleased to add a link to the Ebony article describing how this ME TOO began. ]

Following a quick inventory of my many bosses — two women and five men — my initial reaction was, “that’s not me.” Closer to home, my first husband continues to be a gentleman to his core, and my current husband is as much a feminist as I am.

This “me too” theme reminded me that when I was very young “little Me Too” was my nickname.

And that memory led me to another I’d not thought of for decades. I did qualify! I understand one in five of us women qualify.  ONE IN FIVE.

“Secrets make us sick,” the familiar 12-Step mantra declares. And I believe it.

I’m not talking about sharing what’s private and no one else’s business. I’m talking about an event, a moment that you live in dread will be discovered; one that for too long you’ve felt responsible for. You’ve ignored it, pushed it away, or denied it ever happened. Or you’ve decided it’s “not that important.” And in a dark little corner of your soul, it festers and grows.

I know the power of such secrets. I wrote about one in the backstory of my memoir (At Home on the Kazakh Steppe). But there’s a second one, and it’s pertinent here. I’ve spoken about it before, but always in confidentiality-based self-help groups, closed therapy groups, or other equally secure settings. And in the twenty years or more since then, I’ve never written about it.

Nevertheless, I still feel that tinge of embarrassment — as though I did something wrong — in sharing it.  I wonder, if I let this secret out, how many people will think differently of me? And how differently?

These are old reactions. I know now that I can talk to myself differently. I know I did nothing wrong. And I know also that the people who matter to me will not change how they think of me simply because of what this troubled man assumed he could do. And did.

Even with that, I told myself I didn’t need to share this story: it wasn’t bad enough; it was too personal; too long ago; too weird. How easy it was to minimize it once again.

Kathy Pooler’s Memoir Writer’s Journey landed in my inbox Monday morning and her guest was author Janet Lombardi (Bankruptcy: A Love Story) writing about the importance of vulnerability in writing.  In “As Writers We are Daredevils,” Lombardi says that “risk and vulnerability are worthy companions in the pursuit of good writing.”

It was just the push I needed. And, since I’ve long believed that it’s through vulnerability that we humans truly connect, I realized mine was a story I was ready to put out into the larger universe. I would write about it and I’d share it on my public blog.  I’d even hope others would share it too, if they thought it might help someone else come out of their closet of shame.

So, once again, I’m jumping in.

Let’s go back to that era when my nickname was “little Me Too.”

I was two and a half when I went to live with my grandmother’s younger brother and his “normal” (i.e., nuclear) family (husband, wife, two kids; they even had a dog) in the suburbs of Springfield, Massachusetts. I stayed with them until just before I turned five, when I came back home to New Jersey.

By the time I was eight or eleven — I’m no longer sure when this ended — this “secret” I’m about to reveal, had become a familiar part of the welcome ritual when visiting this uncle and his family. I had not only come to expect my uncle’s mode of welcome (though I do recall feeling uncomfortable) I had come to accept it as “the way he was” and there was nothing, I believed, I could do but wait for it to pass. Sound familiar?

What did he do, you ask?

It had begun when I lived with him, so by the time we were visiting, this was all “old hat.” Rather than saying, “Hello” or “Welcome,” he’d pull me close (in my memory he was always sitting), put his large, puffy hand inside my panties, squeeze my buttocks, and declare, “How are my two loaves of bread?” Back then, my response always included a smile: unhappiness was simply not allowed. I assumed my discomfort was my own doing; I needed to be happier.  It gives me the creeps writing this, even now.

It’s tempting to deflect the reality of what happened; it’s always more fun to laugh.Two loaves of bread? Really? Brioche? Sourdough? Wonder? But I can’t laugh, not yet. Not really. Enough therapy over the years has taught me how I had minimized it, discounted it — and in doing so, minimized and discounted me, too.

I believe he had no idea he was being perverse.

I believe he had no clue that what he saw as a simple, friendly welcome would set me on a path where I was unable to decipher appropriate behavior from inappropriate; unable to own my reality as separate from other’s; unable to trust my instincts.

And, from where I now sit, I believe it doesn’t matter what he believed.

When someone in power over you forces — whether through overt behavior or innuendo — on you a level of physical or emotional intimacy that you are unprepared for, unwilling to engage in, or simply uninterested in, it is abuse, it is perversion, it is arrogance and it must be called out.

I couldn’t do that when I was two, four, eight, or eleven.  But I could call him out when I was in my forties; and I can again today, knowing that by simply telling the story, I take a step toward bringing us all to a place where we will laugh at the utter absurdity of what these perpetrators assume.  I look forward to that time.

Until then, I add my voice to those countless others and say simply, “me too.” 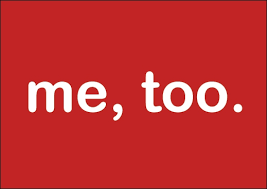 I’ll also enjoy — temporarily — the anger that has risen to the surface as a result of revisiting this; I deserve it.

Next week: I’d like to talk about what Emma Thompson referred to as a “crisis in masculinity” running rampant in our culture.  I’ll bring the video.