I was sorting through old papers in my office a few weeks ago. Here you go; take a look.

I know; it’s a mess.  But forget that part.  This is not a post on clutter and cleanliness.

See that manila envelope peeking out from beneath the edges of my laptop?

Here it is up close: 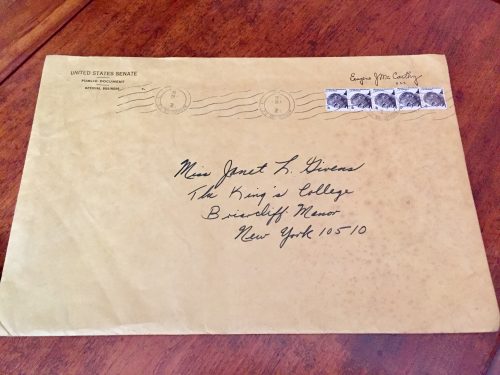 It has been 50 years since I received that package while an undergrad. In it was this note from the office of then candidate for president, Eugene McCarthy: 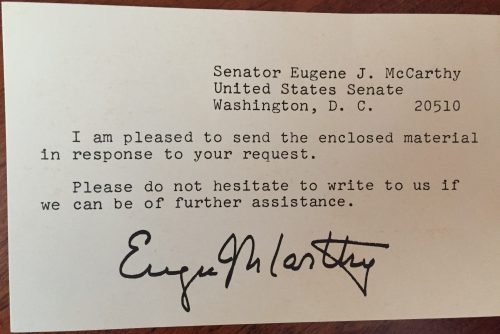 They had mailed me a few of Senator McCarthy’s position papers and speeches: 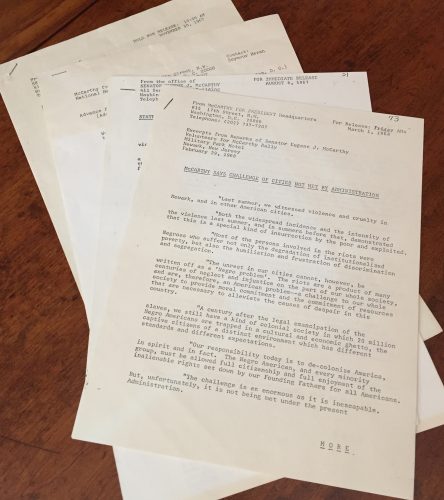 Yes. I had asked for them.

Senator Eugene J. McCarthy (Democrat from Minnesota, aka D-MN) was running against a sitting president of his own party, Lyndon Baines Johnson (LBJ), in the desire to end the war in Vietnam.

McCarthy was not a particularly charismatic politician; some called him aloof.  He in fact fancied himself an outsider, an intellectual, and some say, preferred a good fight rather than just going along. Perhaps that’s why he so appealed to me.

Born March 29, 1916, Eugene McCarthy has been called “one of those uncommon men who puts his courage in the service of his country, and whose eloquence and energy are at the side of what is right and good.”

You know who said that? LBJ, after leaving office.

McCarthy entered politics the year I was born, trained for a short time for the priesthood, and was an economics professor when he first ran for the House of Representatives. He served in the House for ten years and was elected to the Senate in 1959, entering the race for president only after Robert Kennedy repeatedly refused to run.

An interesting aside (for me, anyway):  One of McCarthy’s first forays into “battle” came in the early 1950s when, as a junior Congressman, he took on another McCarthy at the height of his political power: Senator Joseph McCarthy (no relation) of the infamous House Un-American Activities Committee, HUAC.

A man of enormous integrity, intelligence, and stamina, Eugene McCarthy, like Adlai Stevenson before him and Senator Paul Simon after, discovered intellectuals don’t fare well with the American electorate. What is it about our electorate that the voters need charisma, charm, entertainment?  I find that disheartening.

But, I digress from what I wanted to say about McCarthy’s positions 50 years ago.

Let’s get back to those position papers I still have after all this time.

I’ve pulled five statements of his that speak to the urban riots that were a staple of nightly news during the summer of ’67.  See if you have the same reaction I did.

Nine months later he spoke in Newark NJ where he said, among other things,

He concluded by saying, “We have more knowledge, more power, more capability to solve these problems. We need not fail.”

McCarthy didn’t get the Democratic nomination, of course, Hubert Humphrey did, going on to lose magnificently to Richard Nixon — Nixon carried 32 states to Humphrey’s 13. (George Wallace got 5.)

But fifty years ago this week, March 12, 1968, Eugene McCarthy ran for president in New Hampshire and won enough votes, though  just 42%, to push Robert Kennedy into the race.  He had done what he’d originally wanted — to get RFK to run for president.  And we know what happened just a few months later. (Robert Kennedy was shot and killed in early June, hours after winning the California primary.)

McCarthy ran for president a few more times, each time garnering fewer and fewer votes. He left politics nearly unnoticed and turned his attention to poetry. In 1997 he read this poem of his on Minnesota National Public Radio:

The maple tree that night, because its time had come, without a wind or rain, let fall its leaves.
They fell, brown veined and spotted, like old hands fluttering in a blessing,
upon my head and shoulders, and then down in silence to my feet.
I stood and stood until the tree was bare and have told no one but you that I was there.

He died December 10, 2005, of complications from Parkinson’s, while l was in the Peace Corps. I learned of it only in preparing for this post. Here is his obituary in the New York Times.  Here is a piece from NPR that ran shortly after his death.

This has been a somewhat dense post. Longer than usual, with very little of the coveted white space all the blogging gurus emphasize. Rather limited visuals, too. Thank you for staying with it through the end.

I know many of you are weary of politics, weary of the clamor, the noise, unsure perhaps of who to believe, knowing only that you need to stay sane. And self-care is vital; I know.  But, I’d like you to consider what a world we might have had had this somewhat sour man from Minnesota won the votes just fifty years ago this year. And what kind of candidate you’ll be seeking to help us end this current nightmare.

How about you? How important is personality when you go to vote?

NEXT WEEK: We’ll take a look at empathy.