There are two positions on International Woman’s Day, which will be coming up this Sunday, March 8.  And (fortunately for  me)  there’s an absurd aspect to why we do not celebrate it here in the U.S.A.

Given my newly “unleashed” ambitions, I thought I’d take a look.

summarized by this YouTube video and the UN Women website  (The website includes a history of International Women’s Day, beginning in the US in 1909, btw. Check it out).  Here’s the gist:

“Over the years, the UN and its technical agencies have promoted the participation of women as equal partners with men in achieving sustainable development, peace, security, and full respect for human rights.”

What’s not to like, huh?  “Equal pay for equal work” is a call that’s become familiar.  And it’s working (a bit).  When I was in career-mode, the figure was 59%.   That meant women earned 59% of what men in the same job earned.  Today that figure is 77% (unless you are an African-American woman, at 64%, or a Latina woman, 56%) of what a Caucasian man makes, according to the numbers put out from the White House in January.

Beyond equal pay for equal work, the UN Women declaration strives also for sustainable development, peace and security throughout the globe.  How much safer would we be, I wonder, if women in Saudi Arabia had equal rights?  And that’s just one country! If we set out to list the areas of the world where women are still second class citizens … now THAT would be a long list.

I’ll be the first to admit that in Kazakhstan (which is where I first heard of this international holiday) it’s a tad more like our Valentine’s Day when men rush to flower shops for the last bouquet of roses. But at the college where I taught in Zhezkazgan, the female teachers received red roses from the Director and our students presented their female teachers with cards filled with lovely sentiments.

Still, I was intrigued with why I had never heard of this world-wide holiday before Kazakhstan.

That brings us to position #2,
which I shall split into #2A and #2B

IWD, some say, has its roots in the US in 1909, in a demonstration of 58,000 or so in support of the International Ladies Garment Workers Union — a group remembered only by those of us who remember American made clothing.  The demonstration was organized by none other than the “Socialist Party of America.”  Yes, America once had one of those.

The following year, just prior to a gathering in Copenhagen of various Socialist organizations (the Second Socialist International), the first International Women’s Conference was held. Just one year later, International Woman’s Day was observed for the first time by over a million people in Austria, Denmark, Germany and Switzerland.  By 2011, over 100 countries recognized IWD.

I’ll tack on here that in 2011 the US got “on board” (as much as we could) by designating the entire month of March as “Women’s History Month.”  We weren’t going to adopt International Women’s Day, of course, but by golly we weren’t going to be limited to just one day, either.

If you know your Soviet history, 1917 was a pretty important year.  (Google it, if you need to; I’m already way over my word count).

I’ve long pondered whether we’d have such aversion to the word Socialist if it hadn’t been part of the USSR: Union of Soviet Socialist Republics, our arch enemy from the 40s to the 80s (at least).  Too bad they couldn’t call themselves the USCR.

Here’s where a  video of Russians in celebration of IWD fits.

The narration is either sobering or hilarious, depending on your mood. 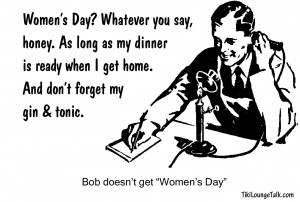 So, in honor of International Women’s Day, I shall post this deleted scene, about one IWD luncheon I shared with my female colleagues.  It’s an early scene, and it’s in the present tense, before an early editor convinced me how tiring it is to read a whole memoir in the present tense.  But, for this short scene, present tense will have to work.

My teachers and I have come to the Korean restaurant for an early Women’s Day lunch. We get our own little room and sit on mats around a very low table. My legs stick straight out under the table; my hips just won’t bend to allow me to sit cross legged. It used to be just my left hip; lately it’s been both.

Almost all my teachers are here. Tolganay sits to my right; Zhanara to my left, Gulzhahan is at the far end, catty corner from me. Assem and Gulzhan are there, as are Kuralai, Kamshat, and both Miras; I think everyone is here except Rustam, our sole male English teacher. Talk turns quickly to Women’s Day.

“In America,” I tell them, “we have no Women’s Day.” Then I explain about Mothers’ Day. “I like the idea of Women’s Day better,” I continue. “Women need more opportunities to be honored, not just if they have had children.”

The conversation turns somehow to the idea of honoring women and whether one day a year is adequate.

Tolganay tells of taking care of her brother’s clothes for him as a child; this was her job. “Did you resent him because of it?” I ask, thinking of the heavy thud that would result as this idea landed in the U.S., even with washing machines.

I must look skeptical for Gulzhahan explains, “Men are considered holy,” which causes me to look even more skeptical, I’m sure. She continues, “Because they protect home, family, the region, and the country.” Tolganay continues, “It is a good thing to be of service to them.” I’ve had no brothers or father in my lifetime to protect me, so I’m not about to quibble. Yet, I begin to wonder if equality is simply a western value.

I grew up on the “all created equal” idea; they didn’t. If they grow up with the idea of an inherent inequality, the idea that men are holy and women aren’t isn’t such a leap.

What strikes me the most is that no one is resentful of this. They aren’t just being tolerant; they feel honored.

Gulzhahan begins the toasts and as others join in. I understanding the power these toasts hold for both the giver and the receiver. Here in this land where each person knows how very limited their power is, they at least have the ability to bring good things to pass for their friends and family. And they relish that.

For the first time, I don’t feel resentful when asked to give my toast. I see them now as part of a ritual with ramifications far beyond the moment. And so, I take the time and give a personal toast to each person.

For Gulzhahan, I wish “enough time” to do all the things she wants to do; “serenity” for Tolganay who has far more obligations in her life than seems fair; “a healthy baby” for pregnant Zhazira; “a dombra player” for Gulzhan; and “ a love affair” for Zhanara. They all listen intently, seriously. I believe they’ve never before thought about what they might want for themselves.

And then someone tells a joke and we break into giggles.

How about you? Two questions, this time:

What do you know of International Women’s Day?  Do you hold more with the first position on it or the second? Would you like to see the U.S. make March 8 a day to honor the contributions of all women?