I’ve been on the road these past few weeks and I have a few musings on that. Mostly they’re about pumping gas. But we’ll get to that in a bit.

My mode of transportation for all of my long-distance travel is the car. My 2006 Toyota Prius to be exact. It turned 170,000 miles on this last trip. I get about 45 – 53 miles to the gallon, depending on how often I accelerate.  (insert smiley face here).

I live in Vermont. I need to drive twice a year to Virginia where we still own the ever-so-charming log “house that will not sell.”

And I drive to Ohio a few times a year where my two adult sons and their families (i.e., my grandchildren) live. It takes a minimum of 12 hours for me drive to one son’s home. Add on another four hours, for the other son.  But thanks to my iPod Touch and a few extraneous CDs, I can get through that extended gap in radio coverage that seems to haunt all long distance trips.

I’d actually rather take the train.  I’ve had a long-standing, romanticized notion of train travel ever since watching Murder on the Orient Express. Or was it Passage to India? Never mind.

The problem is the train schedule.

It takes the same amount of time to go by train as it does by car. (But that’s not counting the drive to and from the train — three hours in Vermont; one hour in Ohio).

Amtrak arrives in Cleveland at 3:30 in the morning and it’s only a little better on my way home: 5:50 a.m. And, if I go into Cincinnati where my other son is, it’s worse: a 1:13 arrival time (yes, a.m.) and a 3:27 a.m. departure. This is because neither Cincinnati nor Cleveland is New York or Chicago, (duh) where Amtrak arrives at perfectly sensible hours.

One year one of my sons flew out to visit us. Between the various connecting flights and the unexpected delays, it took him and his two (very young) children fifteen hours to fly home. He doesn’t fly anymore. He just packs up his little van and takes two nights to get here, camping and sightseeing along the way.

I stopped flying shortly after we returned from Kazakhstan. I figured, why put myself in a situation in which I’m treated either as cattle winding my way through the security “chute,” or a sardine once I get to my seat.

The closest airport to us in Virginia is an hour away and has direct service only to Philadelphia. The closest train station is three hours away in either Wilmington, DE or Washington DC. So I drive.   It’s about the same in Vermont.

So, driving is my preferred mode of transportation. I find if I fill up my car in Vermont — at the local Irving station where they pump the gas for me — I can get all the way to New Jersey (the Vince Lombardi station on the Turnpike, if I’m going to Virginia) on one tank of gas. If I’m going to Ohio, there’s a point at just the time I’m riding on fumes, were the highway runs through the upper NE corner of New Jersey. And there are a half dozen gas stations to choose from there.

For in New Jersey, as we all know, you can’t pump your own gas.

Why is that? Turns out, New Jersey (and Oregon) passed laws back in 1949 (and 1951, respectively) based on safety issues, pump technology not being what it is today. As pump safety improved, self-serve stations began cropping up around the country, except in these two states.

I always assumed it had to do with the oil embargo of October 1973. It was after that that I began to see self-service more and more.

Does anyone remember those long lines at the gas station during that long winter (1973-1974)? In some states, you could only get gas on certain days of the week, depending on the digits of your license plate. 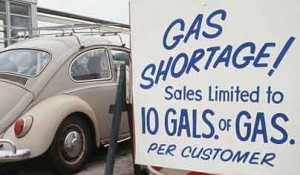 Now, it’s nearly impossible to find a station outside of New Jersey and Oregon that will pump the gas for you. (My local Irving Station is a glorious exception.) That’s important in the middle of winter. At least to me it is. And there are all those drivers with the handicapped stickers who get the good parking spaces. How do they fill their tanks? I think about things like that while I’m sitting in my car having my gas tank filled in New Jersey.

New Jersey’s gas prices are lower too, always less than either neighboring state. On my recent drive down to Virginia I saw the price per gallon drop 20-30 cents once I got into New Jersey. And, I could sit in my car out of the rain while the “fuel associate” (that’s what they are called) filled my tank.

I’ve long wondered about that.  I imagined some back room political arm-twisting.  Well, the truth is a lot less dramatic.

Thanks to a little known site called Defender of the Middle Class, New Jersey’s lower gasoline price is a result of these “full-service” (more like mini service; no one checks my oil or washes my windshield, but I digress) laws.

Seems both insurance rates and tax rates are lower in New Jersey if you’ve got a “professional” doing the pumping. Really. They call them fuel associates. Honest. I don’t make stuff up. (I steal it from the Internet, with appropriate attribution, of course.)

Maybe it’s time to rethink all these self-service stations. Think of the impact on each local economy — all those fuel associates now fully employed.

What do you think?

Would you like to see full-service come back again?

And, while we’re at it, what’s your preferred mode of long distance (domestic) travel?