Last spring on a visit to my grandchildren in Ohio, I had occasion to talk to my eight-year-old granddaughter Kendall about “First World Problems.”

Have you heard the term?  I had thought it was an idea originating with me. I was wrong. More on that below.

You can guess what a First World Problem is: any one of the myriad but rather shallow crosses we in the industrialized, wealthy, capitalist First World bear, and which anyone in the Third World would love to have.

Kendall and I came up with some good examples at the time, none of which I currently remember. But as a tool for gaining some perspective on her problem of the moment, it worked well.

This idea of First World Problems came back to me recently as I was searching for the tablecloth I planned to use for our Thanksgiving celebration. Gold in color, linen in material, it and its 12 matching napkins had seen me through nearly forty (40) Thanksgiving Day feasts.

It would, once again, be Perfect and I couldn’t imagine hosting a Thanksgiving Day without it. But when I couldn’t find it in all its possible places, I remembered I’d given it to one of my daughters-in-law a year or two before.

This had seemed logical at the time, as I was spending more Thanksgivings at her home than I was at mine. But this year they would all be staying in Ohio while I would be home in Vermont making the best of a disappointing situation.

The pity party threatened. No one would even be using my gold linen tablecloth.

Quick stab of disappointment, nipped in the bud by the term
FIRST WORLD PROBLEM.

That stab started me thinking of other “First World Problems” as the Thanksgiving prep continued. I kept an ongoing list in mind and brought it up at the table, with many laughs following as we tossed in our own contributions for FWPs of the day.

Then, thanks to the younger generation at our table, I learned that the term FIRST WORLD PROBLEMS did not originate with me. My nephew didn’t know exactly when it began, but he suggested I Google it.

Here’s The Matthew Goode Band singing Omissions of the Omen, offered purely for the archivists in the audience. The first verse is more than you need.

Wait for me if I don’t show up

Take from me this hypocrite’s cup

And somewhere around the world

Someone would love to have my first world problems

The term made it to Tumblr in 2008 where it took off and, in 2011, #firstworldproblems had its largest spike on Twitter.

There are now two Twitter Hashtags with a torrent of “First World Problems” posted daily. Hyperbole is a common theme in the more amusing ones. To wit:

There’s a website called White Whine: A collection of first-world problems, offering anyone the chance to submit their latest “FWP complaint,” which, I realize, is essentially what I’ll be doing today. I’d love to give credit to the pictured gentleman on the site, but his name is nowhere to be found.

There is even a website where you can create your own FWP meme: 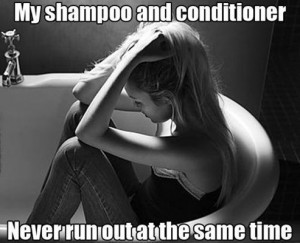 The concept of a First World Problem is one with serious and important overtones. For me, it provides the chance to simply step back in the moment and remember the broader picture.

Labeling the current annoyance, disappointment, or frustration as yet another “First World Problem” helps put it in perspective. And the use of humor makes that possible.

So, in full confession-mode, I give you my #FirstWorldProblems from Thanksgiving 2015 (at the moment I can only remember four):

Just for fun, as you look at my list, can you add your own?