This week I will celebrate (if that can be the word) the student-led National Day of Silence.

These teenagers and young college kids promise not to speak for 24 hours. Who can’t be in support of that?

More specifically, participants take a vow of silence for the day in support of raising awareness of the massive problem of  LGBT bullying in our schools, colleges, and universities.

That’s bullying of Lesbian, Gay, Bi-sexual, and Transgender students of all ages and grade levels — for those of you who’ve been living in a closet for the past twenty years. (now there’s an ironically twisted play on words). 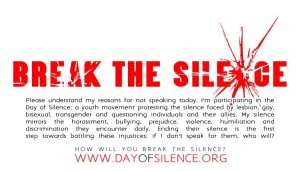 It started in 1996 at the University of Virginia and by 2008, over 8,000 schools and universities across the country were recognizing the observance. Students — straight and gay, transgender and bi —  take a vow of silence for the day.

“What do they do in the classroom,” did I hear someone ask?

Well, here’s how the official website of the DOS explains it.

While you DO have a right to participate in the Day of Silence between classes and before and after school, you may NOT have the right to stay silent during instructional time if a teacher requests for you to speak. …  We remind participants that students who talk with their teachers ahead of time are more likely to be able to remain silent during class.

Sounds quite rational and reasonable to this straight grandmother (though some of my best friends . . ., you know the spiel).

I hadn’t heard of this annual event until I searched the Internet for the best day to post one of my favorite deleted scenes. I call it simply, Homosexuality and, as a way of introduction, I’ll just say that while teaching English Literature during my second year, I had noticed the students giggling whenever the word homosexual or homosexuality was mentioned. These were college students, remember, not junior high.

So, I determined to, at the very least, get them more used to the word, increase their comfort level with the word.

A lesson on Oscar Wilde provided a good opportunity. And, as with all of my deleted scenes that were cut early on, this one is in the present tense.  In this scene, I am team teaching English Literature with Tolganay, one of my colleagues at my college.

During one of the practice classes for our open class on Oscar Wilde, an outed gay man in his day, I realize they’re misusing the words “homosexual” and “homosexuality.” Also, they’re mispronouncing the words quite badly and giggling whenever they say them. I stand up and Tolganay looks at me eagerly. She has been a good team mate.

“Let’s practice ‘homoSEXual,'” I say, and the class repeats after me, “homoSEXual,” nice and slowly, emphasis on the correct syllable. Giggles ripple across the room and a few students exchange cursory glances, which I ignore.

“Good. Now, is this a noun or an adjective?”

No one answers. Do they know the difference?

“Azimat,” I call. “Is the word ‘homosexual’ a noun or an adjective?”

“It is a noun,” he offers, proudly. Azimat is a good student.

Uh, oh. It can be either a noun or an adjective, I realize sheepishly. I try again.

“Oscar Wilde was a homosexual man,” I say instead. “Is this the noun or the adjective? Azimat?”

“Very good. Can you use the word ‘homosexual’ as a noun?”

“Oscar Wilde was a homosexual,” he states and the class, including Azimat, breaks into laughter, which I again ignore.

“Now, let’s use ‘homosexuality’ in a sentence. Anyone?”

There’s silence; the laughter is over.

“Homosexuality is an unusual subject to talk about and one that makes you uncomfortable, I think. Am I right?”

There’s some murmuring in agreement.

“And when you are uncomfortable, you laugh. Yes?”

Again, agreement. I move on, deciding not to turn this into group therapy.

“Is the word ‘homosexuality’ a noun or an adjective?” I try again.

“A noun,” call out most of the class. At least I have their attention.

“Who can use it in a sentence?”

“Oscar Wilde was arrested for homosexuality and sent to prison,” Gulsaira calls out.
“Excellent. Yes. Homosexuality was illegal in England in Oscar Wilde’s day.”

I’m not prepared for this and I can feel it.  I dig deep and remember an early lesson I used with all my classes during my first year of teaching, practicing the days of the week. I remind them.

“OK. We’re going to practice saying the word, ‘homosexual,'” and around and around go my arms.

“Ho – mo – SEX – u – al,” I enunciate slowly, making large circles in the air with my two arms, each time saying it louder. They follow me obediantly until we’re virtually yelling the word. I’m sure we can be heard all the way down the hall. That’s one of the benefits of this college — no one else knows what we’re saying.

Then it’s time for a second round with “homosexuality.” I raise my arms like an orchestra conductor and as I lower them, the class choruses, ‘ho – mo – sex – u – AL – ity.” Up and down pump my arms until the shear lunacy of how loudly we’re yelling out a formerly taboo word has overtaken the taboo. But at least no one is giggling.

The morning of the open class, the students perform their rendition of “The Devoted Friend,” one of Oscar Wilde’s short stories, using their own props and costumes from home. It goes well.

A few days later, when life is back to normal, I ask the students, as I do after each of our authors, “What do you think of Oscar Wilde?”

How about you? Thoughts on this upcoming Day of Silence?