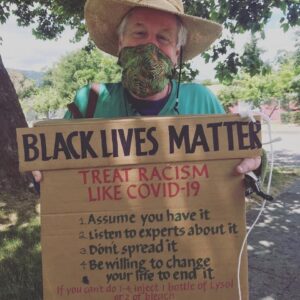 What a great poster this protester carried. Treat Racism like CoViD 19, it declared:

And it’s that fourth one that’s been preying on my mind. What am I willing change in my life if that change could end racism?

A few things have come to mind and, as the weeks go on, I trust many more will evolve.

To start us off, what I have already changed, and what I hope my readers will be willing to change, is that comfortable story I’ve told myself that racism has, somehow, bypassed me. I am not racist, I’ve been able to tell myself. Skin color has never played a part in what I think or do or believe.

I am willing to change my attachment to that belief. I’m willing to examine my history, my stories, my experiences and see anew.

Here’s Michelle Obama to start us off.  This from an Instagram meme she distributed, which I found on the Obama.org website.

“…Race and racism is a reality that so many of us grow up learning to just deal with. It’s up to all of us – Black, white, everyone – no matter how well-meaning we think we might be, to do the honest, uncomfortable work of rooting it out. It starts with self-examination and listening to those whose lives are different from our own. It ends with justice, compassion, and empathy that manifests in our lives and on our streets. I pray we all have the strength for that journey …”

“The honest, uncomfortable work of rooting it out.” she wrote. “It starts with self-examination.” And that is where we will start this week. I hope you’ll join me.

The National Museum of African American History and Culture in Washington DC has a helpful site, “Talking About Race” in which they pose four questions. You might check it out if you’re curious what all four are. I’ve taken the first:

When were you first aware of your race?

[And I’ll try not to get onto my soap box about how race is a social construct; there’s only one (the human race), and we best start using the word that way. We’re talking skin color, ethnicity, and culture here. But that’s for another time.]

When they ask when I was first aware of my “race,” I take that to mean “when did I become aware I was ‘white?'”

And that’s the thing. I never really thought about skin color. Mine or anyone’s. Mine was the one that put me in what we sociologists call “the dominant culture” — the culture that gets to make the rules. As a member of said dominant culture, I didn’t need to learn much about other cultures around me. But they definitely need to learn about mine. And as we’ve learned too recently, for Blacks, their very lives have depended upon this.

So, if the question is “when did I first become aware that my skin was different, in an important way?”  I’d say that I became aware that I was somehow different in skin color when I began hearing the reports of marches and jailings and struggles for justice in the far away south. These were “negroes” the stations said, and from what I could see happening, they were very brave. And the problem, I deduced, had to do with skin color.

That was sometime in the late 1950s; I was in grade school in  East Orange, New Jersey. The Civil Rights Movement was in full swing down there while my northern, urban enclave, by comparison, seemed peaceful and neighborly and safe. I believed, then.

I had no idea, until my 50th high school reunion, for example, that the swimming pool that was once opened in my high school had been concreted-in following the 1954 Brown vs. Board of Education decision that opened public schools to integration. Yes, in northern New Jersey rather than have whites and Blacks swim together, they closed down the pool. It simply boggles my mind now. But back to my life in the ’50s, I simply had no idea the racism that was alive and flourishing throughout the north.

Thinking it quite sad that there was so much turmoil down south, I came up with an exciting plan (for an eleven-year-old): The USA would send all the Black people back to Africa where they had originally come from. We’d help them get settled, we’d cover all the expenses so they wouldn’t have to pay anything; we’d be really good to them. I was surprised none of the adults I saw on TV had thought of this.

Pleased with my plan, I excitedly told my mom about it.

“But what about Anne?” She calmly asked me. “She’d have to move to Africa too.”  I’d never thought of Anne Dunne as anything other than someone I wanted to be like. She got all A’s, she was nice to me, and she had the perfect family.  I wanted straight As, but even more I wanted a father at home every night and I wanted brothers and sisters, just like Anne. As I look back, Anne was my first role model. She represented to me the way life “should be.”

Now writing of this from my chair in 2020, I can see lots of problems with this plan of mine. Not appreciating that Africa wasn’t a country but a continent is only the least troubling. Already, I looked to the power of the purse for the solution. “We’d pay for everything,” I planned. The condescension, “We’d be really nice,” is more troubling to me. And, that it was me, the white girl, figuring out how to solve the Black problem reminds me that not much has changed in the fifty years since. Did I already assume I was somehow superior?

In an earlier draft of this post I had three stories for you, two more examples of just how entrenched my white privilege was to me way back then, through my early twenties. If “white privilege” is a term that you find offensive, well, I only hope you’ll stay with us to the end.

Next week we’ll move to the listening part. I’m accumulating a wealth of links to books, TV shows, films, documentaries, and TEDx talks. And don’t worry; I’m working very hard to be certain it’s not (too) overwhelming. This week I’ll be weeding through these various lists and pulling out what has helped me the most.

We must educate ourselves, as the protestor in the photo above says. But first we must know where we are coming from; we do that by examining our own biases, stories, and experiences. We must begin by assuming we “have it” and act accordingly.

I hope you’ll share what comes to your mind about being whatever color you identify with — when and how did it begin? What’s been the biggest challenge for you these past few weeks?  What troubles you the most about what these challenges suggest?