What better way to bring us back to the roots of this blog than a guest post on a foreign land?  Pour yourself a cup ‘o and get comfy; we’re going to Wales.

Here to guide us is Ruth Livingstone, a retired doctor from England and a long-distance hiker, currently walking around the coast of Great Britain in very slow stages.

Walking the English Coast is not available as an ebook, so Ruth has offered a copy of Soggy Socks, a booklet that describes a rainy-day walk in Cornwall, as a give-away to one of our commenters.

NOTE to my American readers: You might notice a few places where the spelling or the syntax is “unexpected.” I’ve had a delightful time noting these distinctive Britishisms, remembering how I too quickly judged them when I lived and taught in Kazakhstan. How many will you find?

Welcome to And So It Goes, Ruth.  Take it away.

Things I learnt about Wales.

You may have heard of Wales. It’s a lump of land—8,000 square miles of mountains and valleys— stuck onto the west side of England, some way below Scotland and a stone’s throw across the sea from Ireland.

The Welsh are fiercely proud of being Welsh. If you live outside of Britain, you might be forgiven for thinking that Wales is simply another English county with a strong sense of local identity, like Cornwall or Yorkshire. In fact, Wales isn’t a county and it isn’t actually part of England at all. It’s a separate country.

I’m English and live in England, and I always thought of Wales as being a rather backward and uncivilized part of the British Isles. Yes, I made some assumptions about Wales, partly based on the notion that if someone lives reasonably close to me, they must share the same heritage and beliefs, and in part, perhaps, due to an unconscious refusal to accept that Wales really is a different country to England.

Things I thought I knew about Wales.

That was before I set out on my long distance hike, and ended up walking 1,000 miles around the Welsh coast. During that trip I got to know the real Wales and discovered it is a most confusing, perplexing, irritating, contradictory, and thoroughly wonderful country.

Things I discovered about Wales

During the course of my long-distance hike, I followed the Wales Coast Path, which must be one of the most beautiful coastal paths in the world. It took me nearly 2 years to complete and was one of the best experiences of my life.

Having recently published a book on walking the English coast, my next project will be a book on hiking the Welsh coast. I can’t wait to share it with the world and encourage more visitors to this wonderful place. As for the Welsh… well, they’ll just have to put up with another wave of invaders.

When not out trekking, Ruth blogs, tweets and writes. Her book, Walking the English Coast: a Beginner’s Guide is available as an illustrated paperback from Amazon: myBook.to/WalkingEnglishCoast

Here is Chapter One of Walking the English Coast,  to whet your appetite.

My mother loved walking and her walks were part of her daily routine, along with afternoon naps and a morning cup of tea. But, when I was younger, I thought my mother was crazy because I just didn’t see the point in doing all that walking. ‘If humans were meant to walk everywhere, we wouldn’t have invented the motorcar,’ I told her.

‘Anywhere is walking distance, if you’ve got the time,’ says Steven Wright, the American comedian. But if you are a busy person, the one thing you haven’t got is time. There are so many other things to do.

Life passes by, and at a faster and faster speed as you get older. By the time I reached my 50s, I was well-established in my career, working as a GP in partnership with my husband within the NHS, and we had a happy family life. I was experienced and confident at work, and had reached that point of competence where nothing seemed a challenge any more. In fact, every day seemed much the same – mundane, routine – rather boring in fact. I had the strong sense of time slipping past, of my life slipping away.

I decided I needed a real challenge. An epic challenge.

In my daydreams, I thought of climbing Kilimanjaro, or taking long train journeys across Asia, or backpacking through the Himalayas – but none of these madcap ideas seemed to fit in with my professional commitments as a busy doctor, not to mention my domestic commitments with a husband, three teenage daughters, and a couple of aged parents. It’s a sign of my desperation that I even considered training to run marathons. ‘Are you crazy?’ my husband said. ‘You hate running.’

Walking. Yes. I could go walking.

The more I thought about it, the more attractive it seemed. But I wasn’t going to go on aimless rambles, the sort I had hated going on as a child. No, a pointless ramble is… well, it’s pointless. I needed a purpose to my walking, a challenge with an ultimate goal. But a trek that thousands of others had done before me didn’t appeal either, so that ruled out popular routes such as The Pennine Way or Land’s End to John O’Groats. I wanted to do something different. If not unique, at least something that was unusual.

We prefer to create stories to explain our decisions, rather than admit they are entirely irrational and arbitrary. And so I might tell you how I was born in a hospital overlooking the ocean, or how I love the sea because it connects the earth with the sky and makes me feel close to the mysteries of the universe. I might explain that I now live in the centre of the country, far from the shore, and miss the tang of salt, the heave of the waves, and the vast, empty seascapes of the coast.

But the truth is this: I can’t remember exactly why I stumbled on the idea of walking around the coast.

In 1986, a lady called Helen Krasner set off to walk the entire coast of mainland Britain. She had the added advantage of being a writer, as well as a walker and, after she finished her walk, she sat down and wrote a book about her exploits, entitled Midges, Maps and Muesli. ‘I invented dozens of reasons for the walk for the benefit of reporters and TV interviewers,’ Helen explains, before going on to say she wanted to walk around Britain simply because ‘it seemed like a nice thing to do’.

Once the idea had formed, I started researching.

Britain is full of walkers. We’re obsessed with walking, which is commonly cited as one of our favourite national pastimes. We talk about it, write about it, and blog about it. We go for rambles in our National Parks and follow the long-distance trails that crisscross our countryside. We tramp over moors and bag Munros. We walk through forests, fields and peat bogs. Thousands of us have marched from Land’s End to John O’Groats. Yes, we go walking everywhere.

‘Walking the coast,’ I typed into Google, thinking surely everybody was doing it, because nobody in England lives more than 75 miles from the coast. And I discovered something startling: very few people have actually walked around the entire British coastline. In fact, more people have climbed to the summit of Everest (7,000, according to Wikipedia) than have walked around the coast of Britain (possibly around 50, according to David Cotton’s website). Which seemed astonishing.

Immediately, I knew this was it. Walking around the coast was both unusual and a challenge, but it involved only one skill, and that skill was something I already possessed – the ability to put one foot in front of another.

Walking the coast. It was well within my capabilities and exactly the right thing to do.

My mother-in-law became suspicious of my new obsession. She reminded me: ‘You can go to faraway places, but no matter how far you travel, you can never leave yourself behind.’ In a way, she was right. In a way, she was wrong. Yes, you can never leave yourself behind. But walking will change you. It has changed me. It has turned me into a more thoughtful person, a more rounded person, and has made me aware of the great beauty and fragility of the wonderful country I live in. So, you see, I really have left myself behind. The old me.

I was 54 years old when I set off to walk the section of coastline within easiest reach of my home, which happened to be the Norfolk Coast Path. My husband thought I was suffering from a temporary, and possibly menopause-related, insanity and would soon give up. But I didn’t, and when I reached the end of Norfolk, I kept on going.

Six years later, with over three thousand miles beneath my feet, I’m still walking. And I’ve never looked back.

Your reasons for walking will be different from mine. And your ambition may be very different too. You might want to walk in order to get fitter, or slimmer, or for companionship, or to find happiness. You might be contemplating a very long, continuous walk, or you might be thinking of a series of short walks around sections of the coastline.

Whatever reason you have for walking and whatever type of walk you decide to do, remember, it’s your walk. Only you can walk it. TOP TIP: It might be a good idea, at this point, to grab a piece of paper and just jot down a few reasons why you want to walk the coast. And then, read on… you’ll probably think of some more to add to your list in a moment. ~ ~ ~ [/learn_more]

Again, that link for her print book, Walking the English Coast: a Beginner’s Guide, available as an illustrated paperback from Amazon: myBook.to/WalkingEnglishCoast

Ruth’s other social media links are: 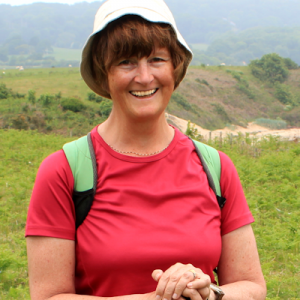 Keep in mind she lives on Greenwich Mean (London) Time. Still, Ruth has promised to pop in here once a day for the next few days and answer any questions we might have. I can think of a slew.

How about you? What comes to mind as you read of Ruth’s travels in and observations of Wales?

If you’ve read it, and enjoyed it, a review on Amazon would be much appreciated.   [/box]